For my thirty second brunch in this series, I was joined by Ryan Beil, Actor at Q4 Restaurant in Vancouver talking about Acting, Theatre and more! 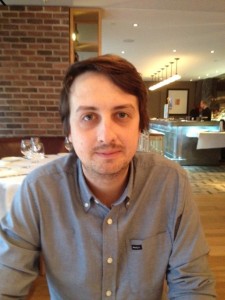 Ryan Beil was born and raised in Vancouver and is a classically trained actor, with a BFA in Acting from The University of British Columbia. Some recent credits: Comedy of Errors (Bard on the Beach), Billy Bishop Goes to War (Arts Club), American Buffalo (Main Street Theatre Co) and an improvised one-act play Skin and Lungs (The Globe Theatre). Ryan has performed Improv-comedy and Improvised Theatre in Berlin, Edmonton, Toronto, Seattle, Chicago, St. Louis, Bellingham, Portland, Winnipeg, Regina, Saskatoon, and Your Momma’s House. He has won a Jessie Richardson Theatre Award for Outstanding Performance by an Actor in a Lead Role, Large Theatre.  He has also had roles in TV shows as well as commercials, one of his notable commercials is being known as the A & W guy.

Always did it from elementary school, full-fledged drama geek in high school, doing all the plays. I saw Billy Bishop on a grade 11 field trip and I then knew what I wanted to do as a career.

Sir Andrew Agasheek in 12th night at Bard on the Beach, it is the funniest funny part in all the Shakespeare. It was also my first time doing Bard.

What was it like for you acting in 2 theatrical productions at Bard on the Beach during the same season?

It’s crazy, the workload is mind blowing, relentless you can’t get lazy, you have to recreate every night, it is like mental aerobics. I had different parts, major role in one and medium role in another.

What is it about Improv Comedy that you so love?

The danger element of it, element of risk to get up in front of people and I love that. You surprise the audience. It is not planned, just happens.

Tell me about Sunday Service

I don’t mind at all, it is the added thing of press. It has provided me with a lot of opportunity to get other artistic gigs and new projects. Started in 2005, supposed to be a one off, but it kept going and now I do a couple of commercials each year.

Sushi or a classic turkey dinner 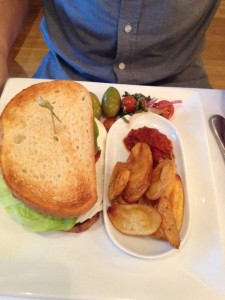 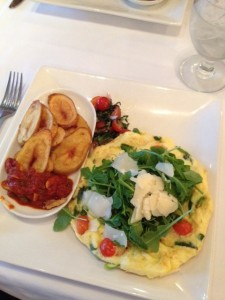 Frittata with tomato and fontina

Ryan had the Breakfast Sandwich and Richard had the Frittata with tomato and fontina.

Baseball – I take a lot of life lessons from this, the rain, the Sunday Service (producing comedy with my best friends).