For my twenty fourth brunch in this series, I was joined by Author, Filmmaker & Satirist Mark Leiren-Young at Cento Notti Restaurant in Vancouver talking about Film, Comedy, Writing and more! 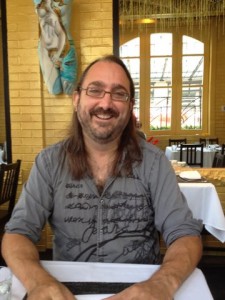 Mark was born in Vancouver and received a BFA (Bachelor of Fine Arts) in Theatre and Creative Writing from the University of Victoria. Mark’s stage plays have been produced in Canada, the U.S., Europe and Australia and have been translated into French and Danish. As a playwright he’s best known for controversial adult dramas (like Shylock and Articles of Faith), controversial teen dramas (Basically Good Kids, Jim) and occasionally controversial political satires (including work with his comedy troupe, Local Anxiety). As a journalist Mark has written for such publications as Time Magazine, The Utne Reader and the Hollywood Reporter. He has also written for most major Canadian newspapers and magazines. Mark currently writes a regular satirical column for one of Canada’s top online publications, The Tyee. Mark made his TV debut in 1995 after an employee of Mainframe saw one of his political cabarets and invited him to write for ReBoot. His first TV script was ReBoot’s X-Files parody (starring Gillian Anderson as Data Nully) that was noted in Entertainment Weekly. Since then Mark has written almost all types of TV including drama, comedy, documentary, animation and variety. He has also written several commissioned screenplays and wrote, directed and produced the award winning feature film, The Green Chain. He was the winner of the 2009 Stephen Leacock Medal for Humour for his comic memoir, Never Shoot a Stampede Queen. Mark splits his time between Vancouver and Haiku.

A million years ago I wrote a radio drama called Dim Sum Diaires for John Juliani made up of five interconnected monologues and we always wanted to follow it up with a series about trees, the issue I thought defined BC. We could never make it happen. Then, when John passed away, I wrote the script for him, gave it to his wife Donna Wong-Juliani and said, “no one will ever do this because no one in the world is as crazy as John.” She said, “I am.” And she told me we were making a movie that I was directing. I premiered the film in Montreal and it went on to play Toronto, Victoria, Calgary and Vancouver. It was also featured in Barcelona and played other film festivals including it’s US debut at an environmental film fest in Cleveland.

How did the films –The Green Chain – Nothing is Ever Clear Cut and This Crazy Time – come about?

After The Green Chain I talked David Beers into doing a podcast series for the Tyee about trees. Loggers love trees, ….. I did roughly 30 podcasts all collective for The Green Chain and Tyee. One podcast was with Tzeporah Berman (the Green Chain – subtitle of book is Nothing is ever Clear Cut).

How did you end up doing an environmental film, when you had previously been doing comedic work?

A lot of my comedic work was about the environment.

Greenpieces in 1999 was a tv comedy show – there is lots of “green” in what I have done.

Which do you prefer doing full length films or stage plays?

No preference. I would prefer to have radio drama if that was still around but it is no more at CBC.

What is the attraction of doing a 1 person show?

I never intended to be the person in the 1 person shows. I travel a lot and can’t always have someone with me. It has been exciting and terrifying.

I haven’t directed tv series, I have done a feature film and stage. I loved directing the Green Chain feature film (we had only 7 shooting days for the whole film).

I never thought movies or tv were plausible here and the notion was they would have to be done in LA. 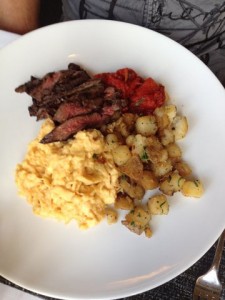 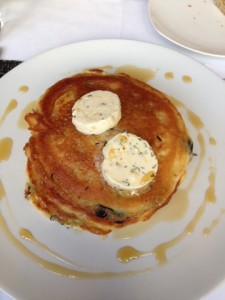 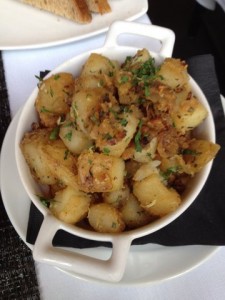 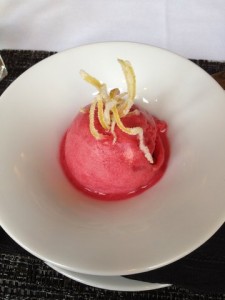 Mark had the Steak & Eggs  and an Orange Juice. Richard had the Gelderman Farms Blueberry Pancakes along with an order of Hash Browns. Mark and Richard both had Raspberry Sorbet to end the meal.

How far in advance do you plan your Films?

Writing one now, based on a story that I thought about in 1984, funded by Telefilm to develop a script.

What is it like to spend lengthy periods of time in Hawaii?

Fantastic, I get tons of writing done there.

Huge fun to direct, definitely one of the coolest things I have ever done. I got to work with amazing actors, an astonishing cast. I wrote the first one with no intention of it being a film. Now I am writing for me to direct and its exciting.

Lots and lots – more movies, plays, pretty much more of everything.

Yes, I want to do a 2 person play for 2 favourite Vancouver actors.

April 2013 – will be doing a solo show in Kamloops, starring Ryan Beil as me. It’s an adaptation of Stampede Queen.

How did you find your agents?

The book agent came through the tv agent, the theater agent came by my telling him to open his own agency so I can be his client; and the tv agent I searched for. I have had 5 agents for many years.

Was post production everything you thought it would be?

Biggest surprises and more so than I ever thought.

Why aren’t you doing any theatrical work in the USA?

Specifically want to work in Canada – it would be an awful lot of paperwork to do a show there.

Did you ever think you would get into any of this stuff growing up?

I wanted to be a writer while I was growing up.