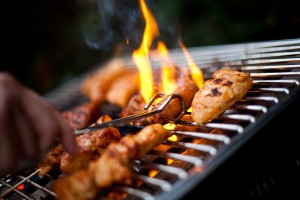 The first ever Cloverdale Cowboy Cook Off BBQ Competition will be held during this year’s Cloverdale Rodeo and Country Fair, May 18-21, 2012.

The competition begins Saturday afternoon at 1pm with a Pie Competition at the BC Bake-off where one of the judges will be Richard Wolak of Vancouver Foodster.

At 2pm there will be a chili contest followed at 4pm by an Iron Chef style contest, BATTLE BACON. Each team will be provided with 5 lbs of Johnston’s BC Bacon and the teams can make anything they want using bacon as the feature ingredient.

The main event takes place on Sunday with the the main competition at 11am, and every hour on the hour teams will turn in different meat entries to the judges. Each judge is certified by the Pacific Northwest BBQ Association. Judges will be evaluating the food based on appearance, texture, taste and flavour. The food is rated on a scale of 1-10 by six different judges. After the teams have submitted their food to the judges, they will pass out samples to the public. Get ready for some of the best barbeque you have ever experienced!

The 1st Annual Cloverdale Cowboy Cook-off is a fully sanctioned, BBQ Competition. There are more than 25 competitors here, from all over the Northwest. They are competing for more than $10,000 in cash, trophies, ribbons and of course, the prestige of winning this fantastic event.

This event is being presented by Well Seasoned gourmet food store in Langley, home of the BBQ on the Bypass – the team at Well Seasoned knows BBQ! Angie Quaale & David Gassaway are the event organizers and are proud to be working with the Cloverdale Rodeo to bring this component to the fair.

How do I get to taste this food?

After the teams turn their food into the judges, most of them will be sampling the leftovers to the public (for free). Jump in line and get ready to taste some of the Best BBQ you have ever experienced. If you’re quick, you’ll be able to sample food from a few different teams. Sample strategically, send your spouse to a different line and then compare notes on who’s food is best in your opinion!

Can I buy some BBQ ?

You bet. Canadian National Champions Smoke and Bones BBQ is selling food from their truck in the food vending area on the fairgrounds.

Award Winning pulled pork, brisket and ribs. Eat it here or have them pack it up so you can take it home. It’s delicious!

Not only that but many of the competing teams sell their signature spice rubs and sauces so you can re-create some of their fantastic food in your own home. Pick up a few, we’re sure, like us – you’ll have a hard time deciding who’s you like the best.

More than 25 teams from all over Saskatchewan, Montana, Oregon, Kansas, Washington and all over BC will be competiting. The teams are happy to tell you their story if you stop and chat with them. They are all really nice folks with interesting backgrounds. Some are professional cooks but most are weekend BBQ warriors. Keep in mind that they will have a little less time to shoot the breeze during the main competition times so if you would like to get to know them a bit better come early & stay late .