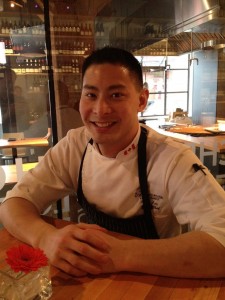 At 13 years old Tom took foods and textile classes in school because that ratio of girls to guys was in his favour. At 15 he was enjoying it and his teacher suggested that he work in a restaurant. At 16 he worked at Cactus Club as a cook. Then he worked at L’Ermitage part time and worked his way up for a year. Tom decided he wanted to do that as a career. He worked at Picolo Mondo for 6 months. He applied at Cordon Blue in Ottawa and got in but then applied to the Culinary Centre of America which he ended up going to for 3 years. After graduating, he got hired at Restaurant Gordon Ramsay in London, UK after pestering them daily for 6 months to hire him. Then out of college he got hired at their 3 star Michelin restaurant in London and he worked there for 14 months, working 16-18 hours per day, 5 days a week. His goal was to work in France, but had to work at Maze (1 star Michelin) in London for the next 6 months. Then Le Jardin Des Sens in Mont-Pellier in the South of France (2 star Michelin) for 1 year, his visa was only for one year. Got hired at West but didn’t take the job. He got introduced to Frenchy at Joe Fortes Restaurant and was offered the Sous Chef position at Goldfish and worked there for 3 years. Tom then worked at Fraiche as Sous Chef for 6 months. Then an opportunity came up where he joined Edible Canada at the Market as their Sous Chef and then last month he was promoted to Chef de Cuisine. 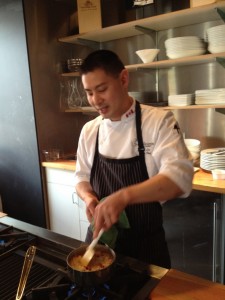 What are you learning from the Vancouver Food Community? 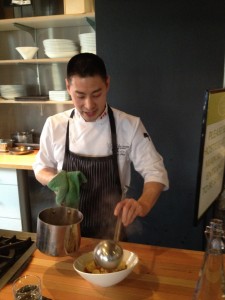 The style of the food, the freshness of the vegetables, the technique and the precision. It’s food first in Europe. 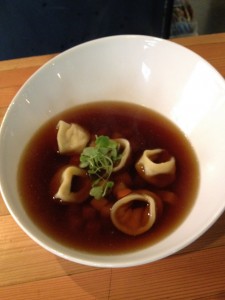 Had Potato Leek Soup and wanted to make a unique version that has elements of what you would think. 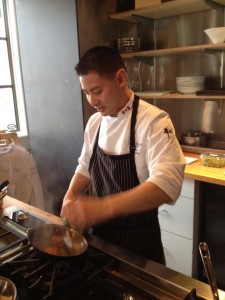 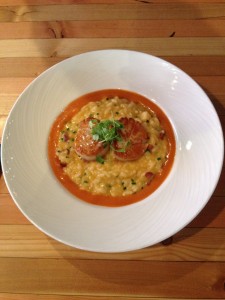 Just decided to make it as a feature for my dinner service. 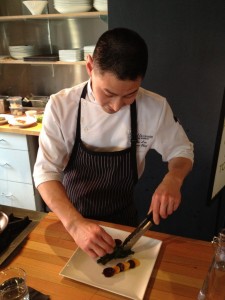 Why did you use the smoked tomato sauce in your risotto?

I wanted to mimic the smokiness of the chorizo and it would cut the richness of the dish. 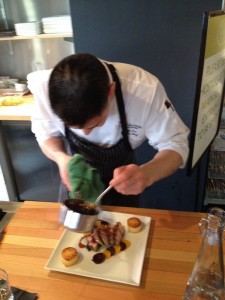 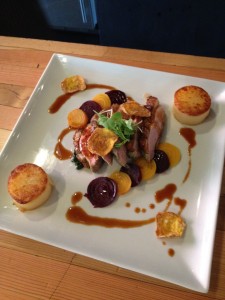 What do you want your chefs to learn from you in your restaurant?

Do you have the creativity to put a totally different dish that inspires you on to your menu?

Yes, it’s just time and finding the inspiration to do that.

Brunch with Bill Richardson at Trattoria