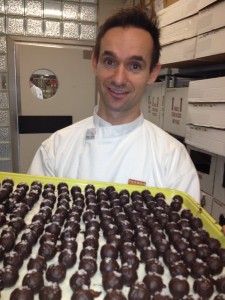 As a child, Thomas lived above his parents’ Black Forest café and bake shop in Germany, where he began helping out at the age of 10. At 16, he apprenticed 60 km away at Discher in Gengenbach for 4 years. Did 6 years working in other pastry shops. He did a Masters in pastry and business when he was 23, he graduated and worked in Switzerland. In 1995, after working in Switzerland and France, Thomas was hired as the Executive Pastry Chef by the Four Seasons Hotel in Vancouver. Three years later, he was off to New York as pastry chef to restaurateur Daniel Boulud.

I was approached by the Four Seasons Hotel in Chicago at first, but I couldn’t say yes fast enough and I didn’t get the job. A year later I got a call from the Four Seasons Hotel in Vancouver wanting to hire me as their Executive Pastry Chef and within 2 weeks I had moved to Vancouver. After working a couple of years at the Four Seasons Vancouver, I was contacted by Daniel Boulud to come and work in NY at 65th & Park and I did that for 2-1/2 years, I had my 2 kids while I was in NY. Working for Daniel Boulud was an amazing experience. Then after a year of my extended 3 year contract I decided to make Vancouver home and resigned and moved. I got a job offer working for the owner of a few hotels to open Senses Bakery at the corner of Georgia and Howe. They wanted to serve chocolates but had no room to make them there. So I set up a “Willy Wonka” of sorts chocolate factory in my home basement and worked 8pm-3am every day for 2 months making chocolates to sell to Senses. A friend who had a commercial kitchen helped me out and they moved the production there. After 4 years I gradually made 20,000 chocolates a week selling to chefs all over the world from Hawaii to Palm Beach. This was my own company and it was a crazy amount of work, my customers had no idea that I slept 3-4 hours a day, worked at Senses during the day and worked making chocolates at night. 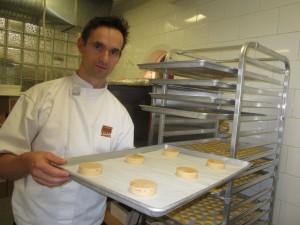 I never questioned it because it was in my family for so many generations.

What you see is the result of them thinking of everything they are making is based on thought.

Just from working and from “So Good” magazine. Your environment influences you. 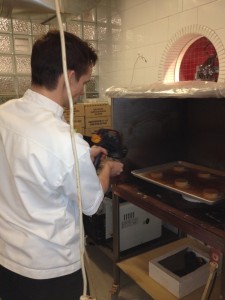 How do you start your day?

With a cappuccino and a morning pastry like an Almond Croissant, I also eat one dessert each day.

Did you ever think your Sparkle Cookies would become so popular? And what inspired you to create those?

A dessert that I made at Daniel in NY became the best selling dessert, Steamed Chocolate Souffle – I then changed it to a chocolate cookie and called them Sparkle Cookies because confectioners sugar was added on top. Food writers were in Vancouver and my cookies ended up on page 64 of the LA Times, then the Vancouver Sun, Food Network it went viral and then boom!

Chocolates or Pastries which came first?

Pastry in my life; in Vancouver chocolates.

Tell me about your connection with Singer Michael Buble?

I loved his music, played it in my kitchens, one day while I was on a trip in New York I was taking a 1st class flight back to Vancouver and I saw Michael Buble and went up to talk to him, we then ended up sitting next to each other in 1st class. It is a long story but I made his wedding cake. 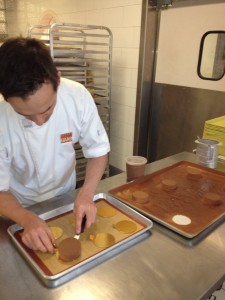 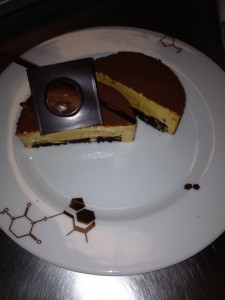 To really have a dessert to be scaled down to add simplicity. You get what it sounds Caramel and cake. We make it in all sizes from small to big.

Which Pastry Confectionary Tradeshows are your favourite and where are they held?

What are your thoughts on Bacon & Chocolate?

Don’t screw around with mixing them together – I love bacon and I love chocolate but it goes so against my beliefs. 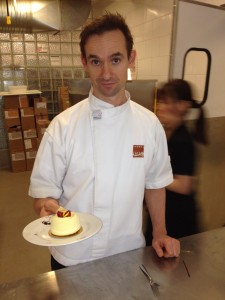 I looked at what we do and see what is missing and thought we needed a white chocolate cake.

How would you describe your style of pastries at Thomas Haas?

Contemporary and have a strong foundation of what works. Contemporary in the approach, pleasing but not boring.

7 tier, 6’ foot 4” inches, 280 lbs wedding cake for the children of the owner of Boston Pizza. The groom asked for it to be that big so if it fell over it would kill some one.

Have you taken part in any pastry or chocolate competitions?

What are your favourite Pastry Shops in the world (outside or your own) ?

What are your favourite chocolate shops in the world (outside of your own) ?

What are your favourite savoury dishes?

How many people are in your pastry kitchen? And tell me about your team.

19 and many have been with us for years, and some have been here for less.

Singer or a musician. Almost anything that could bring joy to others (except a clown)