For my first brunch in this series, I was joined by Actor & Bard on the Beach, Artistic Director Christopher Gaze at The Flying Pig in Vancouver! 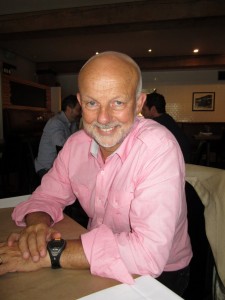 Christopher Gaze is the founding Artistic Director of the annual Bard on the Beach Shakespeare festival in Vancouver, British Columbia, Canada. We chatted over a wonderful brunch at The Flying Pig Restaurant in Yaletown. 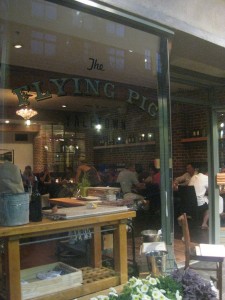 After a successful 2011 season, Christopher is hoping that his festival will become more like Sussex as it grows. This will allow for people to mingle beforehand over a picnic and then start their Bard experience before the show begins making it more of an event. 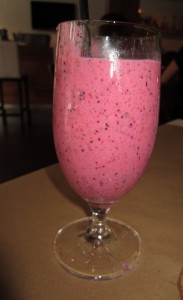 Christopher and I both had an Organic Berry Fruit Smoothie  ($4).

How do cast members perform in two productions during the same season?

The actors love it and you don’t often find repertorary theatre other than Shaw, Stratford and Bard.

We rarely go outside of Vancouver looking for actors as Vancouver has such a good selection of actors. We select 30 actors but they have to be experienced in Shakespeare before they audition. We tend to hire actors who have performed with us in the past. At least 50-60% of the actors return to Bard though that may not be consecutive it may be over a period of time.

The audience enjoys seeing regulars and new people as well. Actors have  to commit for 6 months. 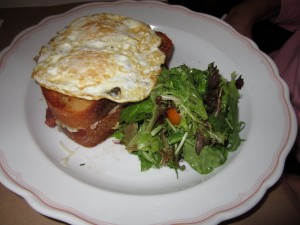 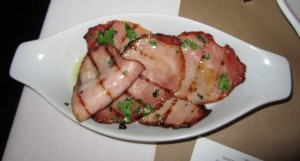 Christopher had  Chef Erik’s Croque Monsieur ($11) and a side of organic and local Fried Back Bacon ($6).

When do you begin working on the 2012 season?

Well we already auditioned for the Mainstage for 2012 this past August and now we are looking at auditioning for our Studio theatre.

Did you Imagine your festival Bard on the Beach would become so successful?

No – Just new it had potential to grow organically just like a restaurant. Quality experience, great location and price.

When did you add a performance in conjunction with the Fireworks?

Well the Fireworks in Vancouver began in 1990 at the same time Bard launched a performance with fireworks. In 1994 we then added dinner to go with the Fireworks to greaten the experience.

Where did you begin your acting career?

I studied acting in Bristol at the Old Vic Theatre School in 1970 for 3 years, in 1973 I left and came to Canada. Douglas Campbell had an acting career in Canada (Stratford) and he encouraged me to come to Canada, he basically set me up to go to Canada. 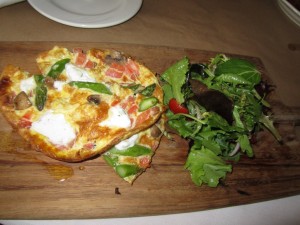 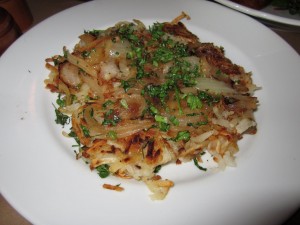 Richard had the Wild Mushroom, Asparagus Chevre Frittata ($12) served with organic greens and a side of Crispy Hash-Browns ($5) made to order lyonnaise style.

Outside of Bard on the Beach and your theatrical career, what else do you do?

I put on 20 concerts per year with the VSO, speaking engagements, MC Galas and so on.

I understand your 2011 season was the first that you did not act on stage, why is that?

I was involved in the fundraising aspect of adding our new BMO theatre and felt that I could not do both well, however I attended almost every performance during the season, we had 220 performances in this years season.

Will you be returning to the stage in the 2012 season?

How does the Youth of our community take part in Bard on the Beach?

We hold workshops for kids in our Young Shakespearean series for 300 kids over the summer. During the school year we also visit 250 schools to meet with the kids to change the way Shakespeare is being taught in school. Our kids program started in 1993.

How do you select the kids to participate in your summer program?

Thousands of kids apply to be a part of our summer program, we have a lottery which is the only way to be fair on who gets selected.

Do the kids in the summer program perform as well?

Yes after 2 weeks of daily participation we held a performance on a Sunday that their friends and family attended. Best way to train and welcome the youth is to make it accessable to them.

How many kids attended your performances in September of 2011?

We had 10,000 school aged kids attend, enriching their lives.

I have a glorious marriage with my wife Jennifer, wonderful children and grand-children. My wife leads me in Fitness, which means that over the last 10 years I have been more and more active in fitness, I run 4 marathons each year, 3 of those in Vancouver and 1 in New York, as well as numerous 10 k’s. I bike all over the city to get around, I love food, good wine and dining in restaurants around the city. I serve as a board member at The Vancouver Club as well.

La Quercia that is if I can get a reservation.

The Sunset Grill in Kitsilano –they welcome you and look after you.

What are some of your Food Musings?

I like Seven Seas on 4th Avenue where I buy their off cuts of smoked salmon, I love it and could eat it every day.

I love wine and specifically a full bodied shiraz.

I love a really good salad.

I understand you are also involved with the Vancouver Symphony Orchestra, how so?

I run the Tea and Trumpets series of concerts we have 6 concerts per year.

This past summer I was invited and spent 4 days at the Sonora Resort in Desolation Sound, it was an outstanding experience.

In October, we are driving to Ashland, Oregon to attend the Ashland Shakespeare Festival. 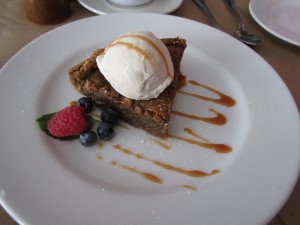 To finish off our brunch, a little dessert was in order, we both shared the Quebec Maple Sugar Pie ($7) with maple bourbon filling, and walnut ice cream. Christopher had a black coffee and Richard had a double espresso.

You know we host a festival in the amazing setting of Vanier Park. I think someone should create another type of festival that is held in a similar setting by another arts group.

I have been fortunate to have many mentors in my life, specifically,

I look for wisdom in older men, constantly searching for wisdom. I encourage young people to do the same “elder guides and their friends”.

I am a born collaborator – comfortable reading, but I like to have people work to have the same goals as me.

What happened last night at your company party?

One of our actors created and showed a film –Todd Thompson -called- Bardumentary –showed last night at end of the season. It was just for us, though perhaps it could be edited to show to others.

I understand tonight is your last performance in the 2011 season, anything special happening?

Well tonight after our last performance of ‘As You Like it” we are having a big party in our village where I will present a sword to the most outstanding company member, figuratively of course, about 10 years ago I was given a sword which has quite the long history, moreover it came from Dorothy Somerset.