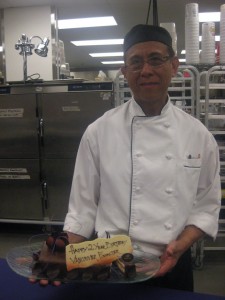 Originally from Manila, Romeo Maghirang started his culinary career as a steward, rising through the kitchen ranks though hard work and dedication.

In 1967 he started as a kitchen steward at the Manila Hilton. After seven months he asked for a transfer to the kitchen thinking cooking is a better skill than a dishwasher, he started in Garmanger cutting vegetables, brewing the coffee for the banquet, learning the a la carte menu for the four restaurants of the hotel. After four years, he moved to the bakery section and stayed there for a year, was then transferred to the pastry section. After eight years at the Hilton he moved to Manila Hotel to take the position of junior commis. After two years he was lucky to find a job at Elbow Beach in Bermuda where he was the assistant pastry chef and baker.

While in Bermuda he applied to immigrate to Canada.  His application to immigrate to Canada was approved and soon after he became the Chef de Partie at the Queen Elizabeth Hilton Hotel in Montreal.  While on holiday in Vancouver, Romeo fell in love with its beauty and culture; he decided to make it his home.  After arriving in Vancouver, he worked at Pohl’s Bakery and Conditorie for two years and then Pan Pacific Hotel where he joined his former pastry chef at Pohl’s. After 19 years as the Assistant Pastry Chef at the Pan Pacific Hotel, Romeo briefly retired in 2008, before he jumped back in the industry when the Pastry Chef at the Delta Burnaby Hotel and Conference Centre asked him to join his Pastry team. He has been at the Delta Burnaby since November 2008.

No, I was studying to be an engineer, finances were tight and I needed a job to support my education. Hilton was hiring and since it is just fifteen minutes away from my school I applied for the lowest position: kitchen steward. I was hired and I was then a working student.

I just mix and match, sometimes I use the old style ingredients and fusion with modern presentation.

Sometimes from good pastry chefs, from books, Magazines such as Tchures (mostly French then) now (mostly Spanish) as well as German and Austrian influences. 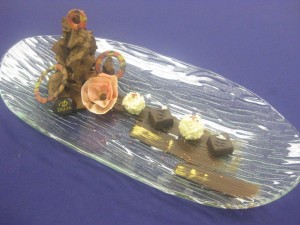 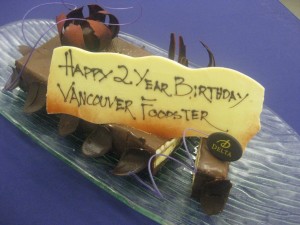 You, I thought what dessert could I make and since you asked me to create something new this is what I created. You were coming in to interview me on July 28th and since I knew it was your 2nd Anniversary for Vancouver Foodster I decided to creating something special.

How would you describe your style of pastries at EBO?

Fusion and modern and classical for the pastries in the restaurant, and a simpler style for the banquets.

Six tier wedding cake with sugar gum paste (harder fondant), cut out and made a design, let it dry and stick together. 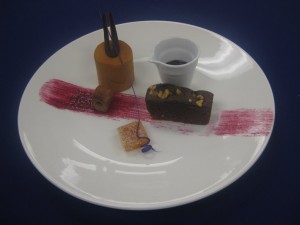 Me and 2 more assistants