Celebrate Canada Day in style, our contest winner will receive 2 tickets to attend Bard on the Beach performance of ‘As You Like It” as well as 2 picnic dinners by Emelle’s Catering on July 1st. Value $140 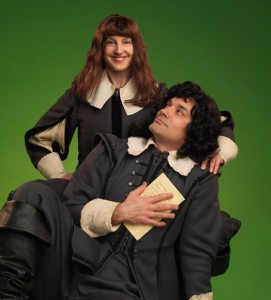 Bard on the Beach

Celebrating its 22nd Season in 2011, Bard on the Beach is one of Canada’s largest not-for-profit, professional Shakespeare Festivals. Presented in a magnificent setting on the waterfront in Vancouver’s Vanier Park, the Festival offers Shakespeare plays, related dramas, and several special events in two performance tents from June through September.

In this merriest of comedies, Shakespeare draws on his signature themes of disguise, misplaced affections and pastoral passion. The setting is ripe for romance when Rosalind, daughter of the banished Duke, runs away in disguise with her cousin Celia to the Forest of Arden. There they meet a pair of feuding brothers and Rosalind, who is masquerading as a young man called Ganymede, finds herself uniquely poised to teach her unknowing suitor Orlando the way to win a woman’s heart. Offering their own commentary on life and love are the melancholy Jaques and the wry clown Touchstone.

Bard’s official caterer, Emelle’s Catering Ltd., offers pre-ordered picnic services to our theatre patrons. From simple bagged snacks with delicious sandwiches, veggies and cookies to dramatic gourmet picnics. You can enjoy your very own feast in our Village as we are now open one hour before the performance start time. You can order your Bard Picnic directly through Emelle’s [at least 48 hours in advance] and pick it up next to the Box Office up to 2 hours before curtain.

1)    Leave a comment below on this post and tell us how you want to celebrate Canada Day.

Contest ends Monday June 27. Contest is open to Canadian residents and the winner will be drawn at random. Good luck to everyone that enters!

Cocktail Kitchen with Driftwood Beer at The Refinery

Night at the Aquarium