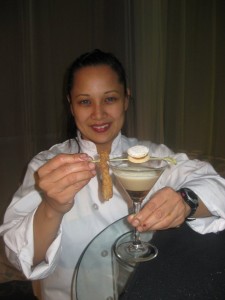 Attending the 22nd Annual VanMag restaurant awards yesterday was lots of fun, this was my 6th time attending these awards and as usual there were surprises, cheering and some award winner no shows. This is my favourite event of the year and as always I had a chance to taste some delicious food by some of Vancouver’s nominated restaurants at the pre-awards reception, you will find some of these eats below. Following the Awards there was a reception featuring eats from Roaming Dragon and wine poured from South African wineries. Following the reception I attended the After Party at Joey Wineroom and enjoyed a selection of bites and good chit chat with fellow peers and restaurant industry folk. I then headed off to the After After Party (by invite only) at Blue Water Café for some more mingling and tasty bites. 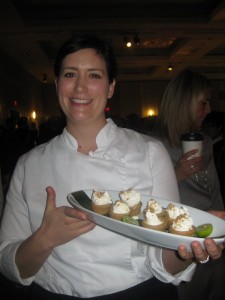 Back to the awards the Co-Hosts of the afternoon were Michael and Fiona, co-hosts of Urban Rush, who entertained the guests with usual back and forth banter. It was great to see Michael come out in has Anti-Flutternutter suit, a play on a dessert that he had at last years awards which ended up on him.

It was great to see Best Food Cart added as one of the award categories, and Pastry Chef of the year be added as well. It was evident that casual dining in this city has progressed to out-do formal dining with many of the awards handed out this year.

The Lifetime Achievement Award was presented Jack Evrensel, Proprietor of the Top Table Group (Araxi, Blue Water Cafe + Raw Bar, Cin Cin, and West), who was a no show on stage, though I did see him afterwards at his Blue Water Café restaurant and he was in good spirits for his win. 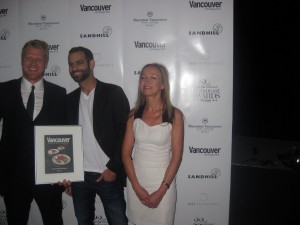 Restaurant of the Year went to one of my favourite restaurants La Quercia, they also won Gold in the Best Casual Italian category. 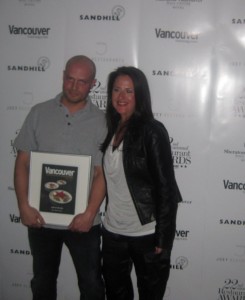 Nico Schuermans was honoured as Chef of the Year for nurturing the burgeoning culinary scene on Beatty Street with Chambar, Café Medina, and Dirty Apron cooking school and delicatessen. Chambar won Gold in the Best Other European/Middle Eastern category and the magazine singled out Café Medina for having the city’s best breakfast. 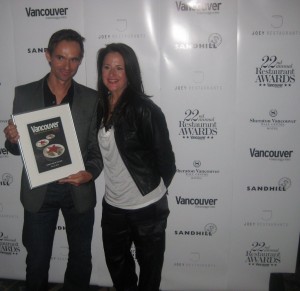 The inaugural Pastry Chef of the Year award went to Thomas Haas. 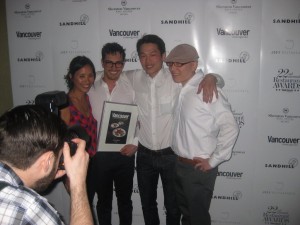 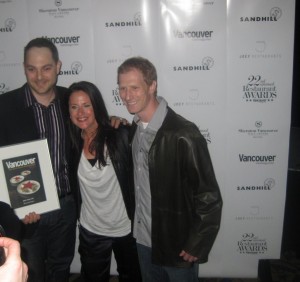 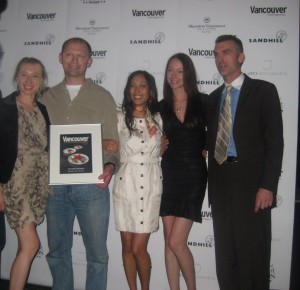 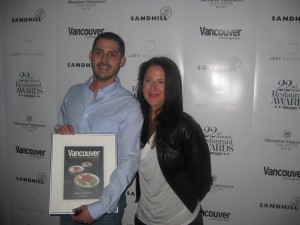 La Taqueria took Gold in the Best of the Americas category with award presented to Marcelo Romero – owner. 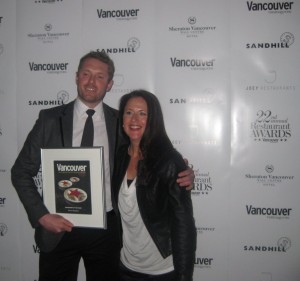 Simon Kaulback of Boneta was named Best Bartender of the Year. 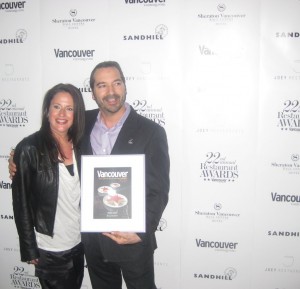 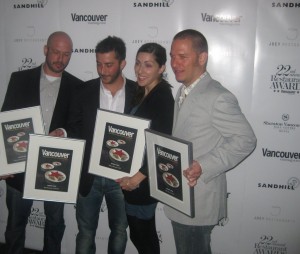 Premier Crew was an award that recognized some of the finest who serves it right, this year they awarded tops in recognition to Paul Grunberg of L’Abattoir, Giovanni Giardino of Campagnolo, Mike Bernardo of Vij’s and Sahara Tamarin of Ulla in Victoria. 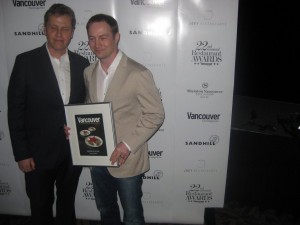 Sommelier of the Year was awarded to Owen Knowlton of West Restaurant. 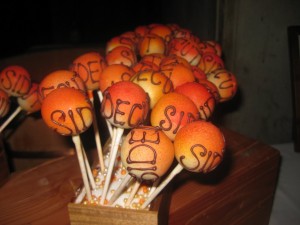 Chocolate covered cake on a stick lollypops from Sidecut Whistler 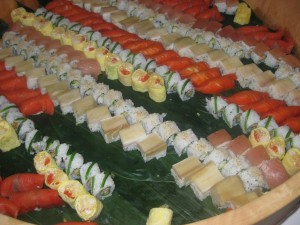 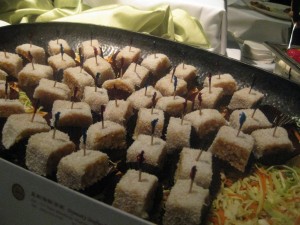 Back to the pre-awards reception, some of my favourite eats were the Chocolate covered cake on a stick lollypops from Sidecut Whistler, Sweet Rice Crisps from Dynasty Restaurant, Sushi from Tojo’s, Deep Fried Squid from Phnom Penh, Macarons from Thomas Haas, Confused Coffee Shop dessert by creative Chef Kat Tuason, Lime Tarts made by Chef Wendy Boys from Cactus Club, and the Arctic Char from Sheraton Wall Centre.

WIN 2 Tickets to Naramata at the Bayshore