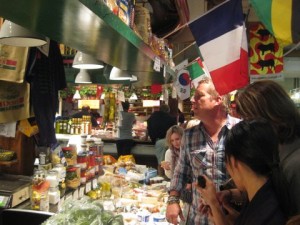 Last Friday I had the pleasure of spending the afternoon with Chef David Adjey, we started off on a tour of the Granville Island Public Market where David was on a mission to find ingredients to cook a recipe that night at the Vancouver Home + Interior Design Show. We were joined by a few women including Carole MacFarlane who won the market tour contest that was sponsored by VHDS. Shopping for ingredients with David was quite the treat for these women as well as for the vendors in the market as he picked up fresh tuna, manila clams, olives, Spanish olive oil and lots of local vegetables for his dish that he aptly named “Tuna: Cool, Warm and Hot”. 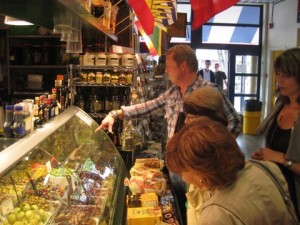 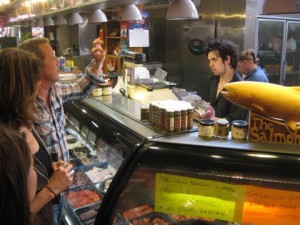 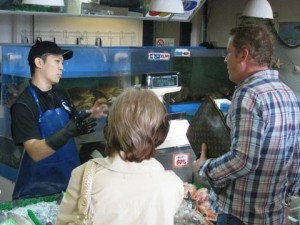 Chef David Adjey has established a strong television presence as a chef-expert for the Food Network on such programs as “Restaurant Makeover”, and is now staring in his own new show for Food, entitled “The Opener”. David who lives in Toronto, has been Personal Chef to actor Dan Aykroyd, appeared on the Jay Leno Show, and realized a dream as Chef Proprietor of his own Toronto fine dining establishment, “Nectar”. 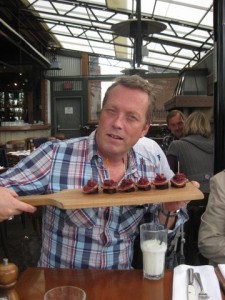 Chef David Adjey at the Sandbar 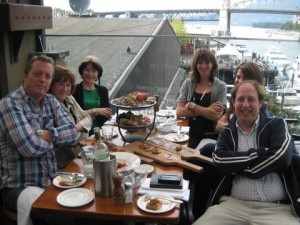 After our market tour we dined nearby at The Sandbar on the patio overlooking False Creek and downtown. We all had a great time talking with David over wine and tasty creations prepared by Executive Chef William Tse. William served us a delicious array of BC sockeye salmon Gyoza, Seared Scallops, Ahi tuna with jam of pineapple and blackberries, Soy brined sablefish, Crabcakes and ginger fried oysters.