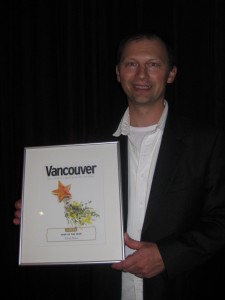 What is your role at Blue Water Cafe? Please describe in detail.

I am the Executive Chef at Blue Water Cafe, responsible for all kitchen staffing, menu design, preparation and costing, and cooking activities within the restaurant.

Where did you do your training to become a Chef?

I completed a three-year apprenticeship in a small 1-star Michelin French restaurant in Aachen, Germany, where I learned the basics of cooking and much more from Christof Lang. After my apprenticeship, I moved to the south of France, where I lived and worked for the next four years, first under Serge Phillipin at Restaurant de Bacon (1 Michelin star), a seafood restaurant in Cap d’Antibes. Then, I worked under Dominique LeStanc for a year at Hotel Negresco (2 star) in Nice, before moving to Cannes to work for Jacques Chibois at the Gray d’Albion (2 star), and then in La Colle sur Loup at the Diamant Rose (1 star) under Daniel Ettlinger, an alumni of Gualtiero Marchesi.

Where did you work prior to joining Blue Water Cafe?

I arrived in Vancouver in 1994 and worked at the Four Seasons Hotel before joining Rob Feenie at Lumière in 1996 as Chef de Cuisine. Three years later, I opened Pastis Restaurant with John Blakeley, which won Gold for Best New Restaurant in the Vancouver Magazine Restaurant Awards. After an amazing 2-year run, we departed ways and I took a sabbatical to travel with my wife. In 2003, I joined Blue Water Cafe as Executive Chef, where I’ve been ever since.

Who are some of your mentors? What have you learned from them?

I have learned from every chef I have worked with throughout my career. Each of them brings a unique approach to cooking and managing their teams. They instilled in me very early, to use only the freshest, mostly local ingredients to create dishes that are simple, yet bursting of flavours. Showing respect to everyone around you is another extremely important quality to have as a Chef.

How did you feel when you won Chef of the Year 2010 in the Vancouver Magazine Restaurant Awards?

It was a remarkable feeling to receive this award, and especially alongside the Gold Awards for Best Seafood and Restaurant of the Year. I felt very honoured to join the group of amazing fellow chefs who have previously received this award.

What are your favourite three dishes that you make?

Choosing a dish over another is like choosing between my twin daughters. I can honestly say that I love all of the dishes we offer at Blue Water Cafe. Otherwise, they wouldn’t be on the menu!

That said, some of the more popular dishes we offer are West Coast Sablefish with a miso sake glaze, Qualicum Bay Scallops, and any of the ‘unsung heroes’ we feature each February (and some throughout the year), such as mackerel, sardines, jellyfish, octopus, and sea urchin, to name a few.

What do you most love about being a chef?

The opportunity to be constantly creative.

What tips would you offer young chefs just getting started?

The best advice that I received in my career and that I like to pass on is that as long as you love—and I mean really love—what you’re doing, so much though, that it becomes part of you, even during times you’re not in the kitchen, the long hours that you’ll spend cooking won’t feel like work, but rather like a playing field of creativity that you cannot imagine living without.

What do you consider to be the five must have ingredients in your kitchen?

If you weren’t a chef what do you think you’d be doing?

There is no alternative to being a Chef for me. I would just be constantly looking for what I have found already.

Gatsby Luau at the Rowing Club