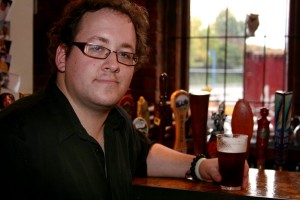 What is a Certified Cicerone™?

What inspired you to become a Certified Cicerone™?

I have had an interest in beer and food for quite some time, along with other beverages. Over the years I learned how most people (even in the industry) think of beer as simple and have almost no understanding of the complexities. Beer is the most popular beverage in the world, out selling wine by a volume of more than 4 to 1. I feel that beer is so much more than something to be quaffed at sporting events or on camping trips. That lead me to my culinary training at PICA, my sommelier education with the ISG and to eventually creating Serious Beer.

What lead you to develop an interest in Beer?

I am not sure what peaked my interest in beer. Most likely it was the affordable diversity. If I were to spend $24 can probably get an ok bottle of wine. That same $24 will get me 3-4 very unique, world class beers. As someone interested in new culinary experiences it just made sense. Beer is also very seasonal. Distillery and winery do not put out new different products every few weeks, often they release just once or twice a year. Breweries often have a new seasonal every month. Different for the foods of early spring, mid spring, late spring, early summer …..

What was your training like to become a Cicerone?

I saw somewhere recently that the one commonality excelling professionals (in almost any field from music to sports) share is logging 10,000 hours of practice. Prior to the creation of the Serious Beer program I teach out of PICA, there was no real industry oriented beer training that wasn’t brand specific available in Vancouver. My training consisted of years of beer festivals, a culinary diploma, a sommelier diploma, a spirits certification, reading anything I could get my hands on and dozens of afternoons/evenings spent talking with brewers and fellow malt enthusiasts over beer. It was mostly a matter of having the interest and putting in the time.

How does one become a Certified Cicerone™?

1.) You take the Certified Beer Server exam offered on the Cicerone site http://www.cicerone.org

2.) You meet the qualifications and register to take the Certified Cicerone™ exam at one of the locations offered. (I will be proctoring an exams in Vancouver from this point forward.

Gaining the the knowledge required to pass the exams is another matter. You either practice/study on your own or you get training. Almost anyone with the passion can do it if they put in the time.

The brewers of Vancouver and the world that are pushing the limits with the beers they create, Garrett Oliver the author of The Brewmaster’s Table, and the late Michael Jackson of beer and whiskey fame. I really like what Nigel has done for the city with the Alibi Room as well.

What do you do as a Certified Cicerone?

Having the certificate is not a job in itself. Most of the others I have met with the title are bar managers, brand reps, educators, and restauranteurs. In addition to the Serious Beer education programs and the odd special project, I work full time for Brewery Creek Liquor Store as a product expert. As awareness of the Cicerone program grows coupled with the steady rise of craft beer, Serious Beer may evolve into a full time role. Currently I am co organizing Vancouver Craft Beer week and the BC Beer Awards

Right now the warm half full americano from JJ Bean I am sipping is pretty tasty. Beer but that is just one of many drinks I enjoy and it is partially skewed by affordability. When the beer selection is limited I lean towards delicate German Rieslings and bourbons.

If you weren’t a certified ciceone, what would you be doing?

If the Cicerone program didn’t exist I would be doing the same thing I am now. The difference being I would have to create my own less recognized certification and try to sell people on the value of it. Fortunately the Cicerone program developed at just the right time and there was no need to reinvent the wheel. If for whatever reason I couldn’t work with alcohol, I would become more involved with my second passion, competitive bbq. There are few things as wonderful as well made smoked pork.