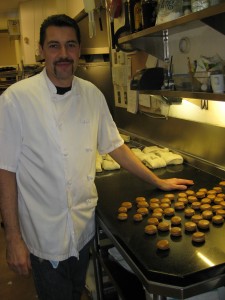 My interview with Thierry Busset turned out to be more like an afternoon conversation of two plus hours that had us talking not only about him and his macarons, and the people who he has worked with over the years in France, England and in Canada, his role as the Pastry Chef at CinCin and his love for being creative.

What is your role at CinCin? Please describe in detail.

I am the head pastry chef and I create all the desserts with the help of my assistants who I oversee, from A-Z including the dough, jam and syrups. 90% of pastry is produced in the kitchen in the restaurant.

I create 7-8 desserts daily and I create the dessert menu so that people could pick 4 or 5 that they would like to have. I try to showcase what is in season, hot or cold and most of all create balance. The waiters are educated on the desserts so that they are able to describe and sell them to their customers.

Where did you do your training to become a Pastry Chef?

I did my apprenticeship for two years in Riom in Auvergne, France where I was born, in a patisserie shop and then I moved to another pastry shop in Roanne, where the chef was a member of the Relais Desserts. In the kitchen there is the Relais & Chateaux, in pastry there is the Relais Desserts. You’ve got one chef who is a member in each city in France, maybe two in Lyon, two or three in Paris –Pierre Herme is one of them. I stayed there for two years. I moved to Auberge du Pere Dubise, a two-star Michelin in Talloire, on Lake Annecy. I moved to London and worked for the Rioux brothers at Le Gavroche and I was working with Gordon Ramsay and Stephen Terry.

How long have you been involved in the restaurant industry?

Where did you work prior to joining CinCin?

I worked at Le Gavroche in London (this is where many famous chefs worked as well including my friend Gordon Ramsay) for 2 years, then 7 years for Marco Pierre White, , including his role as pastry chef of The Restaurant in the Hyde Park Hotel, which was awarded its third Michelin Star during his tenure.

I went to Amsterdam after and worked at The Grand Hotel, a place where Albert Roux was a consultant, and one of my best friends, Stephen Dougherty, was the chef. Stephen was one of the chefs who helped Albert Roux get the third Michelin star at Le Gavroche and helped open a lot of restaurants for him. I then went on to Ireland, Belfast, the Caribean and then Vancouver.

What are your favourite three desserts that you make?

1) Apple Tart – fruity not much sugar

What do you most love about being a pastry chef?

Have you thought about competing in a pastry award comptetition?

One day, I would like to compete in the M.O.F. (Meilleur Ouvrier de France) in France, it is a competition Patissier Award that is held every 4 years and awards 4-5 winners.

What tips would you offer young pastry chefs just getting started?

Patience is the key, learn the craft slowly, be artistic, must have the eye, have a strong mind, know what you want to achieve. Keep learning, find the right teacher and you must listen.

For food (not pastry) my favourite places are Italy, Spain, France, England and Melbourne, Australia.

What are your goals and dreams as a pastry chef?

To open my own French pastry shop and this is currently in the planning stage along with Jack Evrensel, we are going to open this shop together in Vancouver after we secure the location.

I love your Coffee Macarons, tell me what inspired you to create these?

The macarons have existed for the last 200 years, a biscuit from France. I was inspired by Pierre Herme who is a French pastry cheg and makes these macarons moist. They are French meringue with a ganache cream sandwiches between 2 macarons. 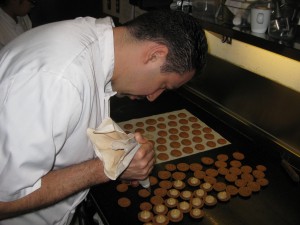 Which wine would be best paired with your Coffee Macarons?

What do you consider to be the five must have ingredients in your pantry?

Who are some of your mentors? What have you learned from them?

4) Marco Pierre White – learned to be consistent, how to do business

5) Christopher Marquant – he was a Pastry Chef in France who is now in Boston – I learned a lot from him.

Something artistic, I would be an architect or a wood carver.

Stay tuned for Part 2 as we go behind the scenes with Thierry into the kitchen.

Chocolatiers in the City