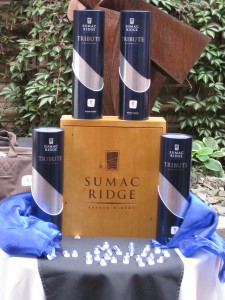 Sumac Ridge held a Media reception on Thursday July 23rd and unveiled a special bubbly called Tribute that is a 100% Chardonnay sparkling wine released in honor of the Olympics.

Sumac Ridge is an official Olympic supplier and this wine will be served at events during the games. Additionally,$1.25 from each bottle sold will go towards supporting Canadian Olympic athletes.

Tribute has not yet been released, but will be available to the public in B.C. after August 1st and released across Canada in the fall. The Official launch will happen September 20th in Vancouver at the 39th and Cambie Signature Store from 2-5pm. Mark Wendenburg (Winemaker) and Roger Planiden (Executive Chef) will be on hand for a taste of Tribute and some delicious food pairings.