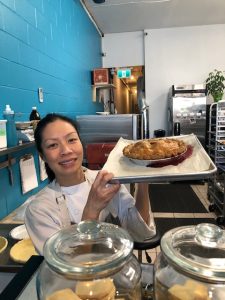 I had a chat with Cheryl Low who owns the Half Baked Cookie Co., located in East Vancouver.

How did you start in the bakery industry?

I actually had a passion for baking ever since I was in elementary school, my friend and I made cheesecakes with the recipe of the back of the Philadelphia cream cheese package and we would make that and think it was amazing. I always had that love for desserts while I was a child.

When I was in university, I had in the back of mind that I wanted to go to baking school but I didn’t think my parents would approve as they paid for my university education.

Many years later I thought it was time as I was in between careers, let’s try this baking thing to see where it goes, I always had a goal in mind to have my own bakery I felt like I had a lot of ideas I wanted to share with people.

Was it hard to decide on which neighborhood to be in Vancouver?

It was really hard as Vancouver is expensive for real estate. We wanted to be in East Vancouver as it was central for our existing customers for our cookie business. 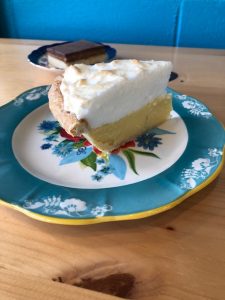 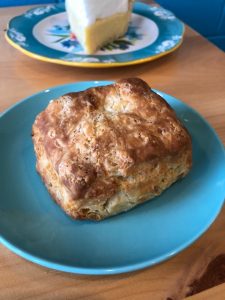 So you had the shortbread cookies that started you off, and now you have pies, biscuits and different kinds of things, do you think the cookies are still a strong staple that you offer or are you looking to expand from there?

We had a wholesale business for our cookies which was going really well, we had our cookies in over 20 stores. I felt that I wanted to make more pies to be more creative, pies are the most popular item, the pies took off in the past couple of years and have now tripled our products by revenue.

What is the most popular pie saleswise that you have done in the past 6 months?

The Chocolate Haupia is the most popular pie, If I don’t have it people are asking for it –chocolate and coconut pudding cream pie.

I think Instagram and social media in general I think is really popular, our new customers tell us they have come from seeing a post on Instagram. They come from Maple Ridge or Mission to come and try our stuff.

What inspires you to create the cookies and pies that you are making? A lot of the flavours are a little bit different than what I see around the city.

I kind of take stuff from a flavour I tried somewhere, I try to use some tropical flavours and fruits as I am from Malaysia.  This week we have the Pineapple Meringue and the Guava Cheesecake.

Has there ever been a treat you wanted to do but hasn’t been a hit for any reason?

I have always wanted to do a Durian dessert, the people here at the bakery just don’t like durian there is a lot of resistance here. It is a bit of a polarizing flavour, durian.

Is their anything that you are looking to do in the coming 6 months, things that stand out for you? For any of the holidays such as Valentines?

For Valentine’s we did tarts in the past, this year mixing it up making maple bourbon butter tarts, and red velvet cupcakes.

Half Baked Cookie Company is located at 1211 Nanaimo Street, in Vancouver and can be reached by phone at 778-848-01015 as well you can follow them on instagram @halfbakedcookieco