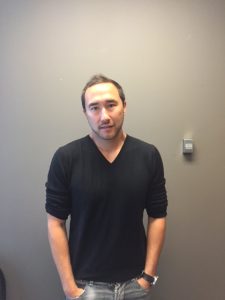 I had the pleasure to sit down with Malcolm Wood, Managing and Culinary Director of Maximal Concepts, the owner of the soon to open Mott 32 restaurant. His firm owns and operates some of the most established brands in the world, and they are based out of Hong Kong.

The 1st one opened 2 years ago in Hong Kong, 3 more restaurants are in the works, asides from the one opening here in Vancouver they will also open two other Mott 32 Restaurants this year in Dubai and Bangkok.

Malcolm said, making it in Hong Kong is tough. It’s got more restaurants per capita than anywhere else in the world.

I asked him about the Vancouver restaurant, it will be 6,200 sq feet, have 148 seats and 4 private rooms and was designed by Joyce Wang. The restaurant is located inside the Trump Hotel in Downtown Vancouver and is scheduled to open in late fall 2016.

Mott32 is named after 32 Mott Street in New York City – the first location of New York’s original Chinese convenience store, which opened in 1851. Today, 32 Mott Street is at the hub of NYC’s iconic Chinatown. The award-winning restaurant takes a modern approach to Chinese cuisine with a strong emphasis on farm-to-table cooking. Mott32 brings the focus back onto ingredients and recipes that have been passed down from generation-to-generation.

I asked Malcolm how he was going to impress diners in Vancouver, being that we live in a city that sees restaurants come and go fairly fast. He said, We had a similar issue to opening our 1st restaurant in Hong Kong and we had to impress everyone on opening. Chinese food has so many arrays of cuisine types and price points, we wanted to go after the banquet market.

About sourcing ingredients, he said they source ingredients globally, for example to find the best duck for their Peking Duck they tried 54 different duck sources and now have a duck farm in the Fraser Valley in BC feeding the ducks a special diet based on their specifications, along with their cooking techniques they will create the best Peking Duck anyone has ever had.

Chef Lai was previously at Michelin star Dynasty Restaurant.  Our Wine Director for our Vancouver restaurant is Robert Stelmachuk.

Our price point will fit the destination, we have a lot of selection, welcoming tourists, business people and locals who appreciate good food. Some of our signature dishes include: Soft Quail Egg, Iberico Pork, Black Truffle, Lobster Har Gow and our Apple Wood Roasted 42 Days Peking Duck.

The restaurant will be next level in dining unlike anything people have seen here before.

I asked him why he chose Vancouver as their first restaurant outside of Hong Kong, he said, he has family here, his mother had lived here for 17 years, he knew the market and decided Vancouver would be ideal for their next restaurant and this is the first one in North America.

They pair their cooking with innovative cocktails and an extensive sake and global wine collection. Enjoying farm to table cooking in a vibrant atmosphere that reflects the energy, creativity and passion of Hong Kong in Vancouver.

Dim Sum will be offered at lunch daily, a smaller scaled down dim sum menu offered at dinner daily, Breakfast offered daily as a traditional Asian style dishes as well as western dishes. We may have a brunch dim sum menu on the weekends we are presently still working on this idea.