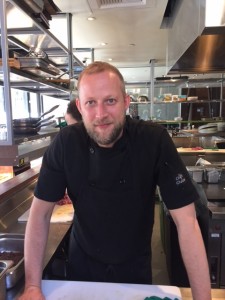 Stefan was born in Uelzen, Germany and grew up in Northern Germany.  When he was 15 years old he went to Tennessee on a high school exchange. He wanted to be a hotel manager or at least he thought he did at that time, he asked his cousin who was a chef what he should do and he said that he needed to become a chef first if he wanted to become a hotel manager. At 16, Stefan started his apprenticeship in Kiel (Northern Germany), he won some cooking competitions shortly after which started his career of becoming a chef. When he was 19, he moved to Hamburg and worked for Le Canard (was one of the top 20 restaurants in Germany at the time), worked from 8am – 1am, 6 days a week and worked there for 2 years as a Commis de cuisine. (They had a great team and all of the 6 chefs had a Michelin star, it was an amazing time and they are all still friends).

When he was 22 years old he moved to Los Angeles, ever since visiting the USA for the high school exchange, he yearned to return. He worked at Patina Restaurant for Chef Joachim Splichal, on Melrose, and he opened 4 restaurants for the company while working there. From there he went to France and worked in Vence for Jacques Maximin, who was considered to be the hardest teachers in the world at that time, and worked there as a Garde Manger. After that he went to Berlin and become a sous chef , at that time he was 24, and worked there for a year.

He was fed up and didn’t want to work in a Michelin star kitchen anymore. Stefan stayed in Berlin, and became the head chef of a 80 seat Austrian restaurant and worked it up to be one of the top 20 restaurants in the city, he worked there for 4-1/2 years. He then left and opened his own restaurant in 2007 called Hartmann Restaurant in the heart of Berlin. The restaurant caught the eye of food critics all over the world, with amazing reviews including in both USA Today and New York Times. he proved worthy of all the publicity and went on to win many culinary awards such as the Master Chef Award and the Newcomer of the Year award. He was given a prestigious Michelin Star in 2010. He then went on to open his 2nd restaurant which lasted 5 months and put him into debt, that restaurant closed, but he kept the 1st restaurant and soon after closed it.

He then opened up the Berlin Marriott Hotel that he consulted on where his name is still on the restaurant menu, Uwe Boll found him by way of his restaurant closing. I came to Vancouver to become the Executive Chef and help Uwe open Bauhaus Restaurant in late 2015, bringing to Vancouver his love and appreciation for European and German fine cuisine. 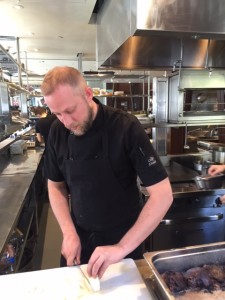 What has it been like for you working with the farmers here?

I haven’t really worked with the farmers yet. It can take years, I haven’t had the time yet to do so as there were so many things I had to do starting up this restaurant. Working with the farms will happen as soon as I am ready. I have to tell you, I’m not happy with the fish here, the quality in Europe is totally different.

What is your philosophy on Local vs Imported products and ingredients?

I believe in quality, you can’t always work local for this size of a restaurant. 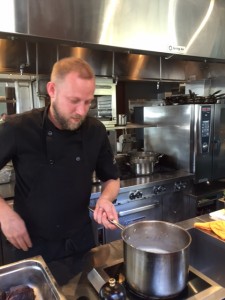 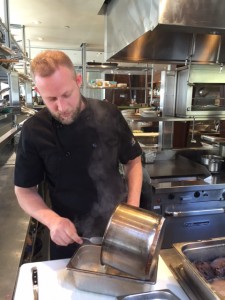 I love what’s in season, I also love mushrooms and morels, Asparagus when it starts, clear flavours, natural taste of carrots, and I love fish. I also love Mexican cuisine.

Yes I love to cook at home. 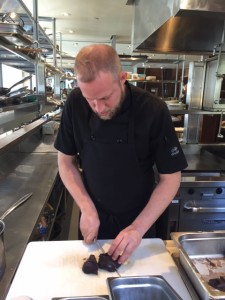 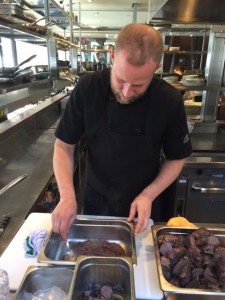 What are your favourite restaurants to eat and drink at in Vancouver outside of where you work?

How do you plan your Menu?

Sometimes I have ideas and sometimes it’s not so easy.

I go to the Nat Bailey stadium farmers market and I get ideas from what I see.

Talking about flavours, components and what works with each one.

Discussions and ideas with my team in the kitchen 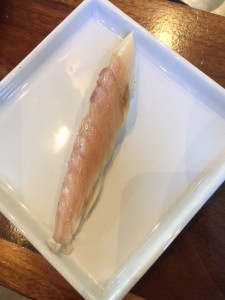 What’s your most recent ‘toy’ addition in your kitchen?

We just got a smoker so that we can smoke our own fish, such as our mackerel.

Has there been anything that hasn’t worked in the restaurant since opening Bauhaus?

Not really. There have been some dishes that I didn’t like and wanted to remove. 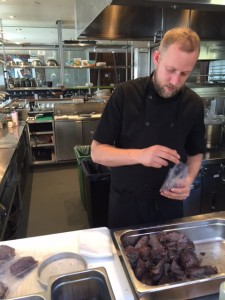 What is the Art of the perfect Schnitzel?

The quality of the meat and the breadcrumbs. I like it when it isn’t too flat. Veal is imported and we get a great quality from our supplier Cioffi’s. 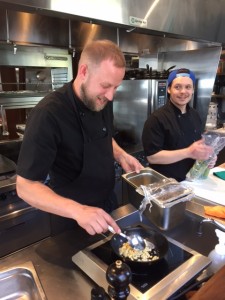 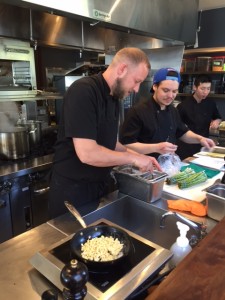 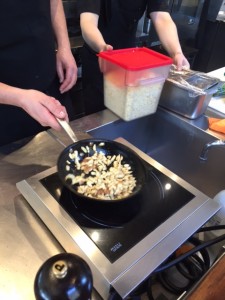 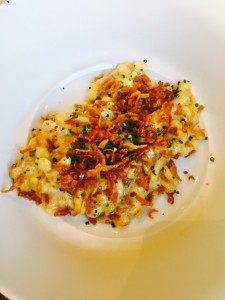 How do you make your Cheese Spatzle?

We use our spätzle then we add caramelized onions, cream, and 4 different types of cheese.

What do you want Vancouver dinners to know about your cuisine?

They would be surprised on how light the cuisine can be, light flavours. Diners should come and try it and we just added an outside patio.