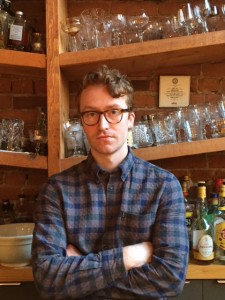 Thor’s bartending career began 3 years ago after he had worked for 4 years in the restaurant industry.  He worked as a bartender at The Teahouse, The Diamond, the Donnelly Group, then The Revel Room, then Wildebeest and The Diamond for 1-1/2 years recently joining L’abattoir as their Bar Manager.

I’ve worked in this industry since I was 18 and always thought that I wanted to be a bartender. They were always so confident, charismatic, and talented. I was going to university and had just been accepted to engineering school when, after a failed relationship and a health scare, I had period of introspection that led me to the question: if I had five years to live, what would I do? The answer was be a bartender and I grabbed that bull by the horns.

I competed in Barate Kid 2014 and was knocked out in the first round. Three days after that event I started at The Diamond, and because of Barate Kid, my goal was to learn to make cocktails quickly and well in that high volume environment. This year I felt confident but with the much larger group of competitors I really didn’t think I stood a chance. I was knocked out of the first heat in the semi finals. This qualified me for the “Wild Card” round of 3rd and 4th place finishers from the previous six heats. I felt much more calm and centered and I managed to qualify for the final. The final didn’t really seem real to me: my first day of work at L’Abattoir was the day after the competition and my angle was that if I went out in the first round I could get more sleep before my first day at work. This caused me to have very little apprehension and allowed me to be much more calm then my competitors. Josh Pape trained me to the be fast and precise but honestly it was luck as much as anything else that led me to victory.

What are your top 5 competitions that you have won in Bartending?

My first competition victory was the Berry Bros. and Rudd comp (No. 3 gin and Glenrothes scotch). This victory gave me a huge confidence boost as I now knew I could compete within the talented bartender pool in this city.

Being a finalist in the Maestros de Daiquiri competition sponsored by Havana Club.

Coming 3rd in the Canadian finals of Diageo World Class 2015.

I try to avoid making “unique” cocktails for guests. Yes, when asked, I will whip up an original, but it will be heavily based off of a cocktail I have been working on or a flavour profile or pairing I have been interested in. I’d rather make them a really well made classic, like Daiquiri or Martini, and potentially redefine how they look at that drink and/or that spirit. My thinking is if a drink has been around for over 100 years, I probably can’t top that with an off-the-cuff creation.

A dish I’ve eaten, a drink I’ve drank, a movie I’ve seen, a joke I’ve heard. It can really be anything. I try to be as open to inspiration as possible. Once I tried a rosemary, pine nut, olive oil ice cream. I was like: I’m going to make this a cocktail. That turned into The Athenian, a cocktail at the Diamond made from gin fat-washed with roasted pine nut olive oil, bianco vermouth, and rosemary & grapefruit bitters.

What grows together goes together. Fresh is better. Simplicity is key.

Where do you get your inspiration to create your cocktails at L’abattoir?

The Castles Made of Sand came from my love of 33 Acres of Ocean and the soft acidity of verjus. The Winston Wolfe was yet another cold brew coffee cocktail I made as I learn to work with the product. The Purple Heart was my attempt to recreate a great drink made by a bartender I once worked with.

I’ve used avocado (pre-L’Abattoir), chicory, vinegar…but I feel like nothing is really “unique” anymore. It’s all been done at this point. The way it’s done is what sets a drink apart.

Daiquiris and Martinis are tied for my favourite. Both are simple, no-nonsense drinks that highlight the base spirit with crisp, clean, well-defined flavours. And you can’t fuck around — they are either good or they’re not.