The 37th Annual Vancouver Folk Music Festival gets underway the weekend of July 18-20, starting off on Friday evening with musicians performing from all over the world through Sunday night. This is one of my favourite music festivals, I have attended 30+ festivals over the years! Each year, as much as I look forward to the music I also look forward to the food.

At the festival last year, I gave out my Awards to the best food vendors for their food and experience!  Get ready to enjoy the food and the music! 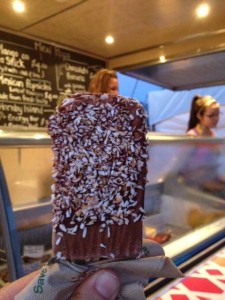 Here is a run-down of what to eat at the fest:

Delish savory & veggie pies in a flaky pastry crust. One bite of these little “beauties” and you’ll think you’re “down undah.”

Delectable, nutritious and flavourful food has always been the standard for David and his team. From Algerian grille chicken, grilled salmon and curries, to homemade Chai and fair trade coffees, it is a comfort food haven.

Handcrafted and freshly-made in Coquitlam; the creative flavours and creamy textures will put a smile on your face. Bet you can’t have just one!

Cup a Corn: Steam Flavoured Corn in a cup.

Whales Tails: Savor a Folk Music Festival tradition, they have been there since the festival began 36 years ago.

Mad Jack’s Chunky Fries: Known for their famous fries at the festival each year.

Taser Sandwiches: The vampires bite, lolos and classics for sure along with others.

Urban Wood Fired Pizza: The best thin crust pie you will ever taste.