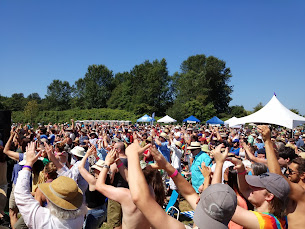 During the weekend of July 19-21, 2013 I enjoyed countless hours listening to music from musicians who performed at the 36th Annual Vancouver Folk Music Festival that was held at Jericho Beach Park. In addition to the music, I ate and drank my way through the festival weekend by trying many of the dishes the food vendors were selling.

Quinoa Salad on the side of the Veggie Burger

My #1 Healthiest Food Award went to Street Meet Truck for their Quinoa Salad. 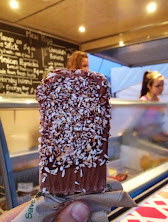 Sharon the owner of Whales Tails with her most popular Herb & Garlic and Cinnamon Sugar!

I met Sharon the current owner of Whales Tails who gave me a history lesson of the popular Whales Tails that have been part of the festival for 34 years.

Gene Freott and his wife Jenny Morris founded the company in 1979 after being asked by a friend, then Director of the Vancouver Folk Music Festival to provide food to sell during the Vancouver Folk Music Festival as well as the Winnipeg Folk Festival. Five years ago the Winnipeg Folk Festival honored Gene Freott on the main stage for his years of service. Sharon worked for him for several years, she then bought the company 5 years ago and still does both music festival in Vancouver and Winnipeg which now employs her entire family. Their Whales Tails are made of a Whole wheat dough and are Vegan friendly, you can find them on twitter @WhalesTails_tm

Crazy Jack and his wife

I also had the opportunity to meet Crazy Jack who owns Mad Jack’s Chunky Fries another vendor who has been part of the festival for almost 20 years, known for his yelling Chunky fries repeatedly. He uses Canola oil and all his fries are Hand cut, he is known as Crazy jack.

Other foods and beverages that I tried worthy of mention include: 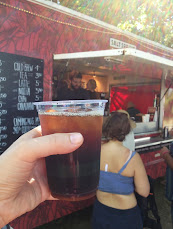 Apple Strudel made by Chris and her team Blackberry Hill

Apple Strudel made by Chris and her team Blackberry Hill