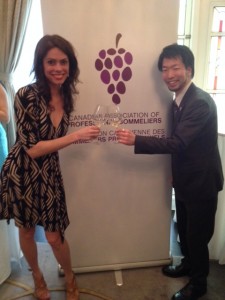 This afternoon I attended a bubble party to celebrate the launch of The Canadian Association of Professional Sommeliers in British Columbia. This Canada-wide association will bring new opportunities, connections and forums to our province.  CAPS have been active in Quebec, Ontario, Atlantic Canada for many years now, and is affiliated with the prestigious Association de la Sommellerie Internationale (ASI) headquartered in Paris.

Held in the York Room at the Rosewood Hotel Georgia, Michelle Bouffard, President of the association, welcomed all the sommeliers, trade and media marking this exciting launch.

•           To raise awareness of the Sommelier profession and its value in the hospitality industry and to the general public.

•           To enhance the role of the Sommelier and promote the culture of wine through instruction, competition, accreditation, and events.

•           To provide a professional forum to encourage community, networking, and education for our members.

Since its inception in 1989, CAPS has promoted the profession, notably by its participation in the Best Sommelier of the World Competition.  Quebec’s Veronique Rivest came 2nd in the world in 2013, putting Canadian sommeliers firmly on the map.  Now that we have established a CAPS-BC chapter, we too can be part of the global competition process.