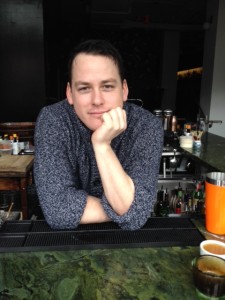 Robert aka Buck is from Australia, he had been bartending since he was 13-1/2 years old, he started out working at a local golf course washing the dishes. After high school he studied hotel management in Gold Coast, Queensland. Buck got a job while at university at Omeros Brothers Restaurant making cocktails, old school cocktails and a lot of cocktails that were vodka based (Belvedere sponsored the bar). He then moved on to the Sling Lounge in Brisbane. Later Buck got a cocktail job at the Picture Lounge making cocktails. He saw that Tales of the Cocktail went on tour to Vancouver, he thought how col is that and he then moved to Vancouver. Buck got a job at the Revel Room where he learned a lot from working with them; he then worked at Maenam for a year learning more about flavours. He then joined Bambudda Gastown 4 months prior to opening to design the bar and he has been with them ever since as the Bar Manager.

He made some of his new favourite cocktails with recipes. You can follow Buck on Instagram at BuckFriendzy

I kind of just fell into in to it. I started out at 13 and a half in the kitchen and occasionally pouring draft beer if needed at the local country golf club and later went to university on the Gold Coast and needed something to supplement my student loan.

Anything that would “Get the party started” or “Can you make something really, really nice for the birthday girl/boy” or “Make it strong”

As I said before I started at 13 so iv been in the industry for a little bit. I was mainly self taught ready old and new cocktail books but not receiving mentorship until H, Robyn Gray and Micah Jensen. These guys really took my game to the next level and you can see similarities within our cocktail lists.

Lets be honest its really hard to create a new cocktail these days that hasn’t been invented before. We are doing a lot of recreating and reimaging. A lot of the time I like to look at the “second” spirit or liquor first and work from there. I like to start with different things like drambuie or crème de cacao or blue curacao. Woking on the cocktail after that is the easy. Inspiration is as easy as going to Granville Island markets or Chinatown or the local tea merchant.

There’s a time and a place for everything. You would be lying if you never enjoyed a McDonalds burger at 2am. Eat and drink what you want when you want it.

Chinatown and Richmond are the two easy stand outs. I also regularly look up bars from Asia on the internet to see what is happening in that part of the world and if I can order ingredients on the internet or whatnot.

Tell our readers about smoke in cocktails and how you prepare the glass and the cocktail when you are making them?

Cocktails whether shaken or stirred can very well taste better smoked. Smoking is easily one of the biggest trends in North American bars these days. A cocktail that you may have had dozens of times can gat a greater depth and distinction added to it with the subtle nuances of smoke. There are two ways to add smoke to cocktails. The commonly known one is to use a smoky spirit, like a single malt scotch or Mexican mescal. The second is to infused an ingredient or the drink itself with actual wood smoke. If a drink calls for a citrus blast I like to add it to the glass fist and smoke the glass so the smoke sticks to the oils and is present throughout the whole drink.

I haven’t found a bad drink yet.

When I applied for university I didn’t put all my eggs in one basket so to speak. I chose three hospitality courses and three teaching courses. So if I wasn’t in hospo I would either be a history teacher or a special needs teacher.