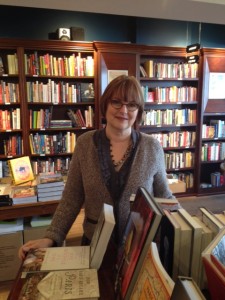 A few days ago I had the pleasure to sit down with Vancouver’s cookbook queen over a coffee, a bite of chocolate and wonderful conversation.

Barbara-jo McIntosh is an award-winning food professional with over 25 years experience in the food and hospitality industry. Formerly the owner of the popular Vancouver restaurant Barbara-Jo’s Elegant Home Cooking, she is now a passionate bookseller and supporter of the culinary arts. Barbara-jo opened Barbara-Jo’s Books to Cooks in Vancouver’s Yaletown district in 1997 and in 2005 relocated to the Armoury District on 2nd Avenue. Barbara-Jo’s Books to Cooks is an epicureans’ delight, where food lovers and cooks of all abilities find inspiration.

Author of the bestselling Tin Fish Gourmet, Barbara-jo served on the prestigious James Beard Awards cookbook selection committee for six years.  In 2003, Vancouver Magazine honoured her with a lifetime achievement award for her many contributions to the local culinary scene. In 2004 Barbara-jo published Great Chefs Cook at Barbara-Jo’s. This charming book captures the ambience of forty culinary events featuring celebrated chefs and authors with over 50 recipes contributed from their own cookbooks. In 2010 Barbara-jo launched french apple press, an independent press whose aim is to publish unique and treasured books for likeminded culinary and book enthusiasts. French apple press released their first book in June 2010, Cooking for Me and Sometimes You; A Parisienne Romance with Recipes by Barbara-jo McIntosh. In her culinary memoir with recipes, Barbara-jo takes readers along with her as she realizes a life-long dream of spending a month living, loving, and cooking in Paris as a true Parisian.

What lead you from owning a restaurant to opening a cookbook store?

I thought it would be a healthier and happier way of life when I got older. I know how much energy it took me running the restaurant.

Had you always had an interest in owning a restaurant?

Yes I probably did, when I was working at Albion Fisheries in the seafood business, I was selling seafood to the restaurants, that gave me an idea to open a fish shop with a café in the newly opened Granville Island Public Market. It was going to be fairly costly to set-up and since I didn’t have the money that idea never worked out. I then worked for Umberto, seeing Umberto in action he had a magic for taking care of people which inspired me. At that time I knew I wanted to have my own restaurant.

How valuable is it for you to offer events featuring the different cookbook authors to your store as well as to the community of food lovers?

First the experience for me is foremost, the experience of bringing the book to life by having the author there. The library is all of a sudden living and every personality is different. Each of the authors have their ideas, hopefully people will come from the experience of interacting and learning from the authors at the events and purchase their books.  Whether it is baking, cooking or fermentation, people have their own interests in the books they purchase.

How far in advance did you work on Ferran Adrià appearing in Vancouver?

I started working on it in July, first talked to the publisher and put my proposal together. For someone of his calibre this type of visit took some time to plan and coordinate.

What interests do you have outside of the book retailing business?

I was fortunate to be brought up in a family who cared about eating from the ingredients to care. I cook more now than ever before as it makes me relax. I will eat almost anything, anytime when I am in a restaurant. I tend to cook more now than I ever have, finding new ingredients. I love wine and a cocktail now and then, especially my favourite cocktail which is a very dry martini with a twist.

Tell me about French Apple Press, an independent press that you launched in 2010

I have published 2 pamphlet books, one of my own books and a book for someone else. I enjoyed publishing my own book. It’s nice to be able to help others publish their books.

What are your Favourite foods to eat?

To have as much focussed energy as you possibly can, and to know you have the desire to do any aspect of that business. From a restaurant to hosting, including your favourite people coming for dinner.

Has the internet business of book retailing affected you?

It has been a real change to understand where people are going in purchasing online than a shop which focusses on talking to people and communicating with them.

How do you keep up to date on the books you have in your store?

I choose to display the books that I do in a particular way with the types of books we bring in. We try to cover everything on food and drink if we can.

What is on the horizon for you in the near future?