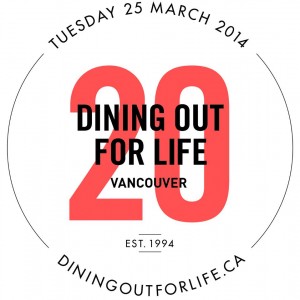 For its 20th Anniversary year, Dining Out For Life* is launching a social media contest that brings together two things people love: good food and free cash.

We don’t have the hard statistics on this, but at any given moment, upwards of 70% of social media is food pics. You’re going to do it anyway, so why not get something for your trouble?

*WHAT IS DINING OUT FOR LIFE?

Celebrating its 20th Anniversary in 2014, Dining Out For Life (DOFL) is BC’s largest restaurant fundraiser. Every year, restaurants from Whistler to the Fraser Valley come together and donate 25% of that day’s food sales to support men, women and children affected by HIV/AIDS in our communities. Over the last 19 years, DOFL has raised $3 Million+ throughout the Lower Mainland. For more information, visit www.diningoutforlife.ca.