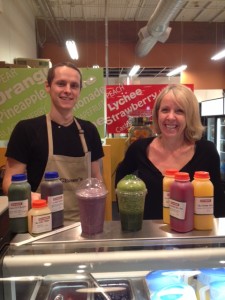 Chasers Juice started 10 years ago in Toronto by Richard Chase, this Vancouver location is the 2nd for the company and it’s run by Jill Forster and her husband. They are 3rd generation restaurateurs, previously owned a chain of their own restaurants in the Interior after 25 years in the business they both retired and moved to Mexico. Retirement wasn’t for them, returning to Vancouver, they opened Chaser’s Juice in Yaletown.

Raw juices (unpasteurized) is the focus, they sell in their juice bar and they also sell to a growing list of hotels and restaurants in the Vancouver area including The Shangri-La, Rosewood Hotel Georgia and Homer Street Café, The Distillery, The Refinery, Burdock & Co. 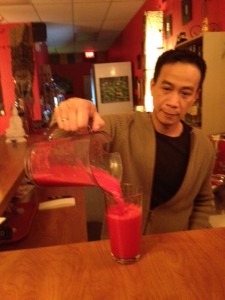 Dharma Kitchen is a fully vegan restaurant which offers a selection of freshly made smoothies along with a line-up of fruit & vegetable cocktails. 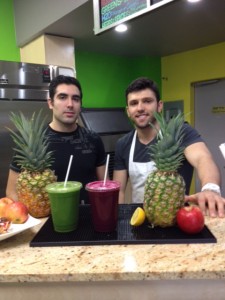 Just Juice was co-founded by Reza Ghafori and TJ Cooke who have backgrounds in kinesiology, health and fitness along with bartending experience. They opened in August 2013 serving a loyal clientele from the neighborhood as well as people that trek across town. I have enjoyed many of their smoothies and juices including the “Pina-Ava-Coco-Gaga” (coconut water, milk & meat, Avocado, vanilla & pineapple) and, “Choco-Awesome” (almond milk, peanut & apple butter, raw cocoa, honey, banana, apple & VEGA Protein). 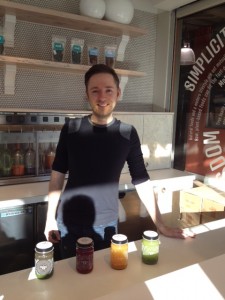 Krokodile Pear was founded by Nick Lewis who has a background in HR and after some time working for some large companies, he left his career and started another by getting into juicing, specifically Cold-Pressed Juices opening in the summer of 2013.

One thing that struck me in this juice bar, is that they have their juices on tap. Similar to wine on tap, now there is juice on tap. Cold pressed juicing creates the highest quality juice, however it is quite labour intensive which is why typical juice bars don’t use this method.  By storing their juice on tap, they are able to pre-press their juices in small batches, and serve it to customers in a fraction of the time it would take to press it in front of them.  Additionally, cold press juicing introduces less oxygen into juice than a typically juicer which extends the shelf life to 72 hours with minimal nutritional loss.  By serving it on tap in a system without any oxygen exposure, they can serve the freshest juice possible.  They also serve juice on tap so customers can customize their juice or smoothie.

Unique products: Cold-Pressed juices, the juice bar along with their smoothies which are made using their juice.

There are many other juicing companies around the city, some of the others which I have visited previously worth checking out are:

Abbott and Water Street (on the corner), Vancouver

Celebrating Valentine’s Day with a Twist