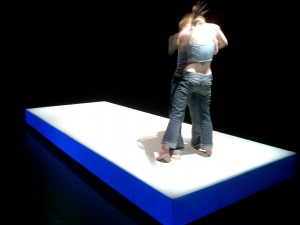 Vienna-based Liquid Loft, known as one of Europe’s most inventive and cutting edge dance companies, brings the witty and provocative duet Running Sushi to Vancouver on October 31 – November 2nd, as part The Dance Centre’s Global Dance Connections series. A satirical commentary on the shallowness of modern consumer culture, Running Sushi is a series of episodes performed by a quirky couple on a giant sushi platter: at the start of each performance, the audience is invited to randomly select the order of the segments, creating a ‘menu’ of dance dishes. If you are inspired to enjoy some sushi before or after the performance you can visit Juno Sushi Bistro at 572 Davie who is the events sponsor.

The dancers (Johnny Schoofs and Calgary native Stephanie Cumming) are a cartoon couple on the verge of breakdown, grappling with desire, shame, fashion and chopsticks. Their precisely executed movements echo the two-dimensional ‘superflat’ style coined in Japan by Takashi Murakami. Text, sound and movement combine to create a highly original, idiosyncratic and often very funny exposé of superficiality in contemporary culture. Running Sushi was conceived, directed and choreographed by the Austrian choreographer Chris Haring, who worked with companies including DV8 Physical Theatre, Nigel Charnock and man act before co-founding Liquid Loft in 2005. The work has toured worldwide and also visits Halifax, Montreal and Calgary in the fall.

Running Sushi is a co-production of ImPulsTanz Vienna International Dance Festival and Liquid Loft in partnership with the Choreographic Centre Linz and Tanzist Festival Dornbirn.