Welcome to the Vancouver Foodster Barista Signature Beverage Challenge. I have invited cafes from all over the city to enter up to two of their baristas and their respective signature beverage creation into this challenge, their baristas had to create a new beverage just for this challenge. Each café will be featuring their Signature Beverage creation on their menu from August 28 – September 25, 2013. 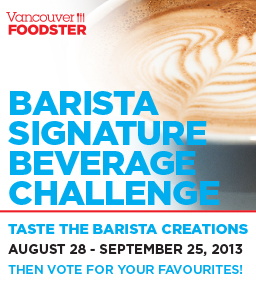 My Favourites — if you have picked up one of the challenge postcards from the participating cafes, flip it over to the backside and keep a record of your favourite baristas and their beverage creations.

Here are the 8 Baristas and their Signature Beverage creations in this challenge, listed in no particular order other than when they were received by us. 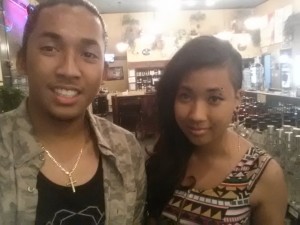 Blandin is 20 years old, and a student currently going to, Kwantlen Polytech University, in the Sociology program. She has been working as a barista at, Wired Monk, in Fleetwood  for 3years. She absolutely loves working at Wired Monk! She loves the versatile   ingredients, they aren’t ridiculously sweet. They can adjust how to flavour each drink perfectly, and cater to everyones specific needs. There  ingredients are organic, which is definitely a plus, for our health conscious society. The Wired Monk, has a very warming and inviting atmosphere, and the people in the area are so kind. 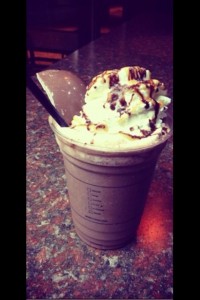 Coffee Crisp take on, of the Chocolate Bar, Coffee Crisp. If you like chocolate this is definitely a delicious drink to indulge in!

Louis is currently a student studying at Kwantlen University and working at Wired Monk Coffee bistro Fleetwood Centre. He goes by the dancing barista drifting shutterbug alias because he loves dancing, making creations, working on cars and snapping photos ! He loves working in an environment such as Wired Monk because they only use organic fair trade coffee and the freshest ingredients available ! In his spare time he plays ukulele and started up an open mic which he has performed at in their shop. 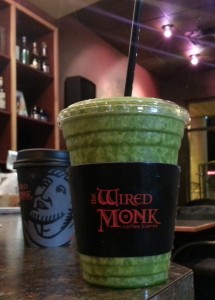 The Incredible Monk which is a matcha greentea kale smoothie with lots of fruits and veggies. 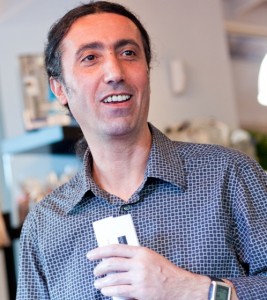 Few baristas can say they were raised in the very region coffee originated in the 16th century, Turkey–historically known as The Ottoman Empire. Turkish coffee is different than an espresso; it’s boiled rather than brewed. Barista, Paul Dincer, inherently understands its medicinal, cultural and ceremonial significance.

In addition to a deep understanding of coffee, Paul has a unique combination of creative and technical prowess. As a published author, Paul’s infuses creativity into everything he does, including beverages and chocolate–Paul is also a chocolatier. Almost immediately after launching his chocolate business, Koko Monk Chocolates, he became recognized as one of Vancouver’s leading chocolatiers. Paul’s traditional background combined with his pastry chef training and a passion for innovation give him a solid understanding of each ingredient’s properties that help him maximize flavour potential and evolve them in a new context.

Paul stays relevant exploring his passion for new flavour combinations in his chocolate shop. He also enjoys discovering other world-class culinary innovators through researching online and in own comprehensive library of thousands of books. Paul hopes to redefine how people think about coffee and chocolate. 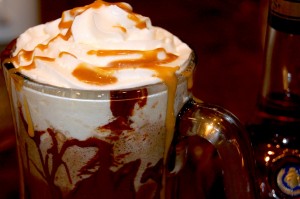 A drink for gods and goddesses, exotic and misty turkish coffee with 72% fine Belgian dark chocolate, flavoured with a dash of Courvoisier Cognac (optional). This remarkable and adventurous drink will prove her sense of aesthetic with her salted caramel strikes, like curved roads to a distant chateau, on top of its whipped cream peak. Surely, it will take you from the mundane realm of the day and throw you between humps of a dreamy camel in an unknown flavour mirage of ancient worlds…it will stir the heavy sediments of your worn out heart and shine  like a 24 carat gold watch while it re-tunes you with the universe. 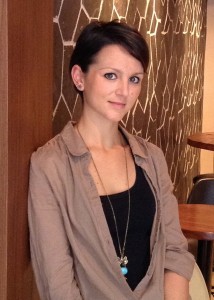 Price: Price: $6.95 –optional non-alcoholic version of the same drink which will be $ 3.45 for a single espresso shot and $ 4.20 for a double espresso shot

Born and raised in Italy, Angela’s passion for coffee started more than 8 years ago, but it was when she arrived in Canada that she discovered her true love for the coffee shop life style.

In Italy, coffee is more like something that people need: a break from work or from study or a boost of energy to be ready to start the day. But in Canada, it’s about something different: coffee is a way to meet people, to enjoy life, something you want to spend time with: enjoying it, sip after sip. It was in Canada that she started to have fun while working and experimenting and perfecting the art of latte art and all the infinite number of drinks you can make with a”double shot”. Making a coffee became more than just the action of doing it but rather it became about the creation, the connection and making people smile and feel good. That’s where her true love of coffee was born.

Angela describes herself as an artistic person who loves hearing everything people have to say because she knows that even the smallest & simplest of actions can influence someone’s feelings and that even a little heart on your latte can make your day. Prior to joining Betty, Angela often thought about what would make the perfect coffee shop in terms of atmosphere, people and drinks and she was delighted to join the team at Betty as she found that the dream already existed.

Betty was opened in August 2012 and features only fresh, local café foods, an all-BC line of wines and craft beers and delicious coffees created by Angela and her team of loving Baristas. 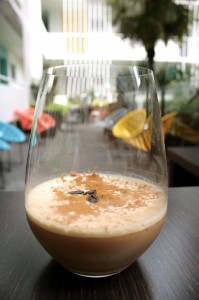 An italian classic with a Canadian twist. Freshly made espresso spiked with Irish Cream, lightly sweetened with maple syrup and shaken until chilled and frothy. Finished with a hint of cinnamon, it is the perfect drink to help you transition from the hot nights of summer to the cooler ones of fall.

Betty at The Burrard 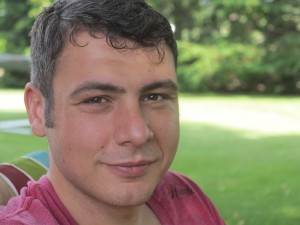 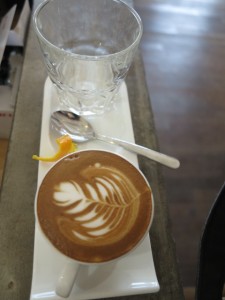 Nick is normally an espresso/black coffee purist/snob but for this competition, he decided he wanted their espresso to be just one layer in a harmonious symphony of flavors.  He knew virtually right away that his signature beverage was going to include chocolate.  Their espresso has dark chocolate and almond notes and he felt the chocolate would compliment the coffee without overpowering it.  They normally use a milk chocolate syrup for their Mocha’s in the cafe, but he wanted a deeper flavor layer beneath the espresso so he opted to make his own dark chocolate syrup.  Nick has seen combinations of garlic and chocolate before but he was unsure how the two would work with espresso.  The resulting beverage was good, but the flavors were all too bass.  His uncle Jordan suggested an orange peel twist and the beverage had that high note that it desperately needed.  All these flavor elements work in balance and they kind of play peekaboo with your palate, one minute you taste the roasted garlic and then its the orange or the chocolate.  He has had these sorts of dining experiences before and hopes that he has recreated that with this beverage. 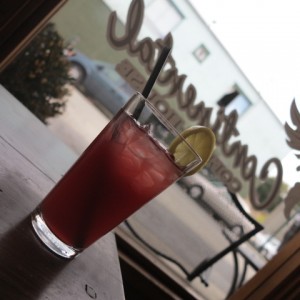 They have been making iced tea and lemonade all summer and had originally planned on doing an iced tea lemonade of some kind. After experimenting with a few flavor combos they hadn’t really found anything that they liked.  Angela was grocery shopping one afternoon and noticed a juice made from the coffee berry in the refrigerator.  Angela tried it and was astounded that something this good took this long to be produced.  Adding it to their fresh squeezed lemonade created the perfect summer quencher. 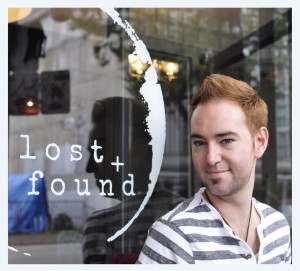 Tony Bullis (24), grew up in the small town of Toronto, where the coffee culture extends about as far as Coffee Time and Tim Horton’s. Fortunately, Tony was able to hone his craft at some of the finer cafés throughout the city. There are about three. In January 2013, Tony travelled to Vancouver where he has found a home at Lost + Found Café. Apart from being a barista, Tony is also a freelance screenwriter, beach enthusiast, and self-proclaimed wine expert. 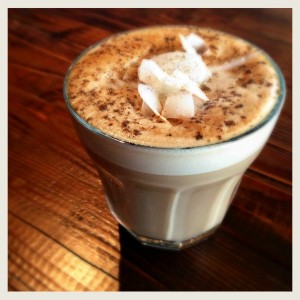 Rickshaws, chai wallahs, crowded streets, temples and tombs, heat mixed with heady aroma of sweet incense. Inspired by the sweet flavours of Asia, we take you on a voyage toexotic and dreamy lands by adding  lush, sweet, aromatic fresh cardamom and a hint of coconut to our traditional latte. Drink the experience. Go far. 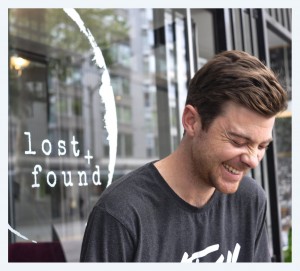 Olly recently moved to Vancouver fresh off the boat from New Zealand. While touring the city and discovering new adventures, he talked his way into a job at the Lost + Found Café. Coming from a background of fun awesome times, working in film, making props, crafting coffee and generally causing trouble. He’s now started his new life in Canada, making cool & deadly affogatos! 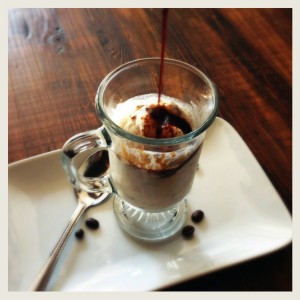 Intrigue in a glass. Pour our dark, moody, intense ristretto shot over the sophisticated, tongue-teasing sweetness of figs hiding in a swirl of velvet ice-cream. Mix, slurp, enjoy.

Make sure you pick up one of the Barista Challenge postcards available at each of the participating cafes and keep a record of your favourites. Remember to Vote daily for your favourites from August 28 – September 25, 2013 at https://vancouverfoodster.com/barista-challenge/