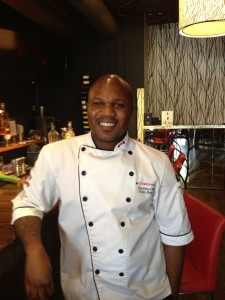 Victor Bongo, a talented and promising young man of African descent, has made his way to a respectable reputation by creating works of art and challenging the culinary standards by incorporating flavours from different ethnic backgrounds in his exquisite dishes. Chef Bongo is the author of a cookbook titled: “The Excellence of Chef Victor Bongo”, which was published in March of 2009 by Xlibris Corporation. In addition to his extraordinary work in the kitchen, Chef Bongo is passionate and dedicated to providing positive changes within the community, both here in Vancouver & in his birthplace in Africa. He is on the board as Vice President of Chain De La Solidarite Nord Sud Foundation; a non-profit organization giving assistance to the people developing countries around the world. Futhermore, Chef Bongo is currently working closely with the Dr. Greg Chang of Super Chefs of the Universe, which is devoted to the prevention of childhood obesity, to put together a program that will focus on children picking and cooking with fresh, healthy foods.

His creations have landed him the honour of Chef of the Year in the Yukon Territory four years in a row from 2008-2011.. Chef Victor Bongo credits the foundation of his career to his mentor Edmund Liew, the 3-star Michelin Chef who was apart of the winning Team Canada-Alberta at The World Culinary Cup in Luxemburg.

When did you start cooking?

At 17, I took home economics at Maple Ridge Secondary and loved the foods class. The teacher gave me a cheque personally to pursue a career in culinary education because he believed in me. After high school I studied Culinary at VCC. I then worked at Subway and A & W, then worked as a line cook in a pub in Coquitlam, promoted to kitchen manager at 19. I then worked at the Wedgewood Hotel and then moved on to be the Chef de Partie at Seasons in the Park. From there it was off to Alberta and I was a cook at Sorridge in Fort McMurray, within a year I was a prep cook, line cook, Jr Chef and Banquet Chef. I then worked on Holland America Cruise line on a 5 month contract as Chef de Partie, then I was promoted to Private Chef, then I decided to return to Vancouver. I worked at the Marriott Pinnacle Hotel in the afternoons and at the Four Seasons in the mornings. In 2008 I was hired at the Raven Hotel in the Yukon and did pastry for the first time and loved it. I won Chef of the Year in the Yukon in 2008, spent a few years there, in 2011 I returned to Vancouver to work at Daniels Restaurant in Coquitlam and joined Establishment Tapas & Cocktail Lounge as Executive Chef in the spring of 2012. 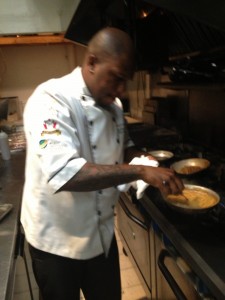 What is Super Chef?

It is an organization that teaches kids to cook healthy and hands on cooking. Learning where the food comes from working with the farmers in Abbotsford. Play sports with the kids as a break. The organization was started in Surrey by Dr. Greg for ages 8-12.

Tell me more about the Orphanage 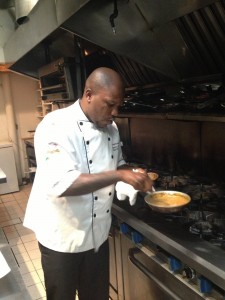 When did you create your 1st cook book?

While I was in the Yukon, people were asking me about my recipes and where I was from etc. I published the book in 2009. 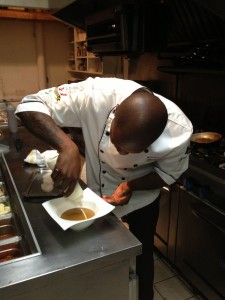 What excels you to do better and better in your craft?

I have to keep up to the amazing chefs in Vancouver. This challenges me to be creative and to come up with the best dishes I can do. I focus on what I can do for my part, I like to play with flavours, spices. I take ideas from my travels when I was on the cruise ships. 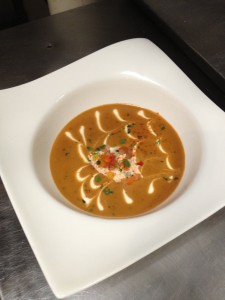 True French cuisine with a bisque, create the dish infused with orange brandy adding a twist. 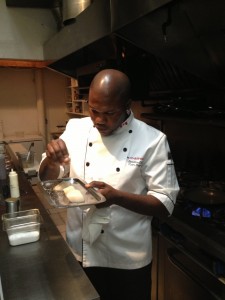 My mamas cooking –rice, beans, fried tilapia, as well as stews over rice. 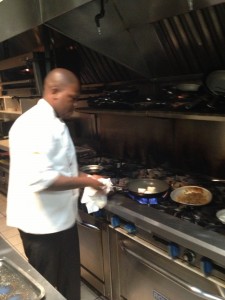 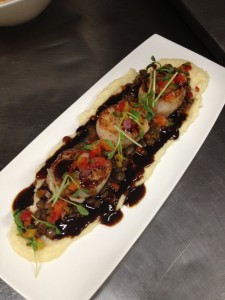 I love scallops and I wanted to keep them on the menu. I love parsnips and African lentil salad and turn it into a French inspired dish that I can share with every one, salty of bacon to balance. 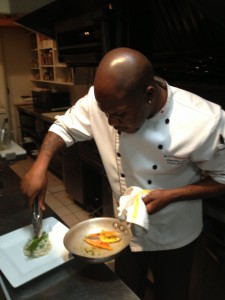 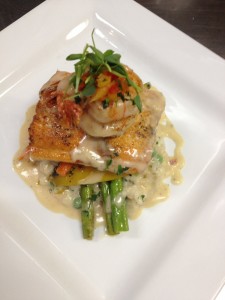 Memories of the Yukon, using char for the dish. I added prawns to add to the flavour of the char. Fusion with the risotto and coconut milk and then the sauce.

You are known for Chef Bongo’s African Peanut Soup, How did that come about?

My mom used to make an African dish while growing up. I played with the dish and I wanted to make it healthy and creamy, so I added coconut milk and lime juice and fresh cilantro enhancing it to another level. The key is how you roast the peanuts. 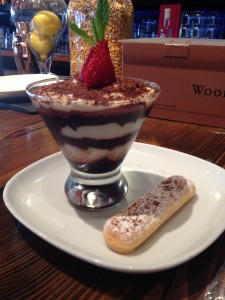 This is one of my dessert creations making the best Tiramisu.