For my second Friday Lunch in this series, I was joined by Vancouver City Councillor Heather Deal over lunch at Rogue Kitchen & Wetbar on Broadway. 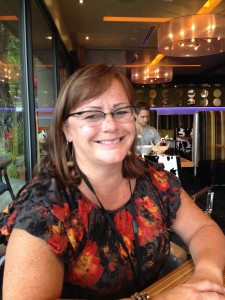 Heather Deal has served as a Vancouver City Councillor since 2005, and was a Park Board Commissioner from 2002 to 2005. Heather is a professional biologist and a long-time environmental educator and activist, and sings with the Vancouver Bach Choir, which she served as President of their board. She was born in England, raised in Michigan, moved to Vancouver in 1984 and proudly became a Canadian citizen in 1991.

Heather has brought her passion for our urban ecosystems, arts and culture and accessibility to City Hall. She is a director of Metro Vancouver, sits on the Metro Waste Committee and has been the liaison to the city’s Access and Inclusion Advisory Committee for six years. Heather has been council’s point person on bringing fun and festive events to all corners of Vancouver, from introducing new street food carts to our streets, to championing live-work spaces and the reduction of red tape for new performance spaces, to promoting and encouraging large-scale arts celebrations like the Cultural Olympiad and Summer Live. You can follow Heather on Twitter @VanRealDeal

Have you always had an interest in politics?

Yes, my mother was an elected official in Michigan. I worked on campaigns since I was 10 years old, handed out fact sheets. I did a Master’s degree in Micro Biology Environment.

How did you end up running for office on the Vision Vancouver slate?

I ran for Parks Board on COPE, then the party was renamed Vision Vancouver, previously I was chair of the Parks Board. I wanted to be with a party that governed, I went to Larry Campbell and I asked him if I could join and run with him.

What drives you to succeed with the many different hats you wear as a Vancouver City Councillor ?

Success is determined by the voters and I am lucky to be an elected official with a great working team, the leadership and staff at city hall are tremendous. I love my job and am honored that the people of the city allow me to do what I do.

You have spearheaded the Food Trucks program in Vancouver, what types of challenges have you faced since before the program began? And to where the program is now?

Before there was a lack of clarity as to the barrier of the Food Trucks, we changed Government, Managers and we had the Olympics. We didn’t change a single bylaw when we rolled out the permits for the Food Trucks. It was all about engineering, the physical aspects, space, size of truck, water supply.

Then they brought in city health to get it all up and running, we brought in staff that were knowledgeable with food systems, we didn’t hire new staff, we just moved staff from other areas to this project. It’s rare to get an email from engineers with exclamation marks, Allan and the staff were very excited.

Pods in Portland can happen on private property, Real Estate is expensive in the downtown core and around the city, the Waldorf Hotel Food Cart festival that started this summer held each Sunday was done so on private property and was very successful as I understand.

Now we are issuing 15 permits per year for 2 more years to a maximum of 130. Our Food Truck program is running smoothly now. One thing that is new and forthcoming soon are Mobile Grocery Stores and we have 3 licences on hold now for underprivileged area such as the downtown east side.

Were there any lessons to learn after the new street food carts were on our streets?

Just a spacing issue that was quickly solved.

Well worth considering, but we would have to be concerned about existing restaurants with liquor licenses.

I have seen many new food trucks appear recently that weren’t granted licenses in the permit application process, I imagine regulating the food trucks can be quite difficult on a political level, is there concern of the food truck licenses selling their licenses?

Our staff is monitoring that, they have to focus on health permits – health is the primary concern. 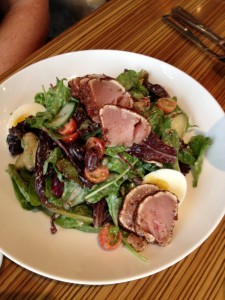 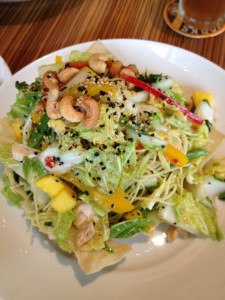 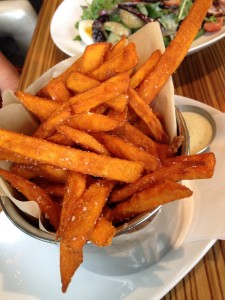 Heather had the Albacore Tuna Nicoise Salad and Richard had the Coconut Poached Chicken Salad, they both shared an order of the Yam Fries.

First of all I love food, but I do love a good burger, and I also love sushi.

If you weren’t in politics, what would you be doing?

The Mayors Arts Awards where each award winner was able to introduce an emerging artist.

Has Social Media played a significant role as a city councillor?

Absolutely, tweeting is a great way to stay in touch and get quick feedback. It is a good way to take a reading on what is happening.