For my twenty second brunch in this series, I was joined by Film Producer Robyn Wiener at The District in North Vancouver talking about Film and more! 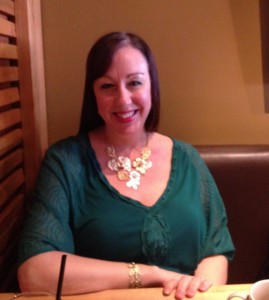 Robyn holds a Bachelor of Arts from the University of Winnipeg, is an Alumni of full-time film studies program at VFS and a former bursary recipient of the world renowned Banff Centre for the Arts. Robyn has over 16 years of experience in the film and television industry, having worked in many aspects of production and proudly holds over 40 professional credits to her name.

As a Producer, Robyn has been producing and developing projects since 2002 and has been attached to several award winning short films which include the DGC Kickstart short My Inventions, The Comedy Network aired short, The 30 Second Guaranteed Foolproof Ancient Cantonese Method, the Bravo! Fact short BANGER: The Journey the MPPIA award winning short film Move Out Clean and a Leo award winning music video, Accidental Kisses. In the Spring of 2011, she produced the short film The Money Pet starring Peter Benson and the voice narration of Tony Award winning actor, Alan Cumming (The Good Wife, X-Men, Cabaret). Over the past few years, Robyn served as Line Producer/Co-Producer for the horror-thriller American Mary (starring Katherine Isabelle, Ginger Snaps), the ‘bromance’ comedy The Wingman, and was the Line Producer for the Indie-film, Amazon Falls (TIFF/VIFF 2010) as well as the presentation pilot, Kits for CityTV.

How did you become involved in the film industry?

I was always involved in the arts, danced for years and took lessons. I majored in theatre in university in Winnipeg and became a stage manager. I then went on to the Banff Centre of the Arts, and then worked at the Royal Winnipeg Ballet for 2-1/2 years. Moved to Vancouver to attend Vancouver Film School and that experience provided me with some film making tools & confirmed my interest and passion in filmmaking that i’d had for a long time. My first real job was in 1994 after I finished film school.

How did you become a Film Producer?

Always wanted to do it. After being an assistant for everyone (Directors, Writers, etc). In 2002, Director/Writer Bob Holbrook asked me to become Producer of his short film.

You have worked on feature length films as well as shorts, do you have a preference to either?

I would rather do feature length films. A Short film doesn’t mean short crew. You still need to have all these people to work on a film. Features make more money but you are married to a project for awhile.

Is there any difference for you producing a Short vs a Feature Film?

Stakes are higher with a feature as you are hoping for a theatrical release. Shorts are going to get you a festival circuit, with airplanes etc.

1) Sherri Lansing – I saw her speak at Amazing Lives & Experiences and she was a powerhouse with a strong vision. I admire her for what she has done in producing.

Tell our readers about your recent comedy ‘The Wingman’ and what your role was with that film?

Worked with Director Jim Garrison (we met by Craigslist – I responded to an ad posted on Craigslist). I was a line producer and co-producer on the film. 20 locations, 30 cast and shot the film in 17 days in downtown Vancouver. Had a private screening for the cast and crew, currently working on distribution. Took 2 years to do as it was edited and directed by Jim.

What is a Line Producer?

Similar to a production manager. It is the person who makes sure the production stays in line – on time and on budget.

What are your favourite restaurants inside Vancouver? 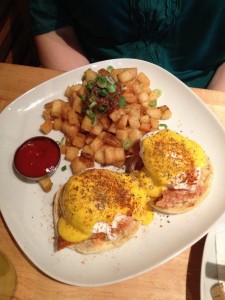 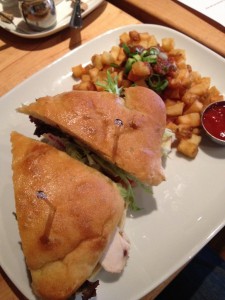 Robyn had the Salmon Benny ($13) with house-cured smoked salmon along with an Orange Juice ($4) and a coffee. Richard had the Oven Roasted Chicken & Brie Sandwich ($14) – chicken breast with Canadian brie, house made tarragon and rosemary preserves with brunch potatoes.

Tell our readers about your involvement with Women in Film

I was President of Women in Film & Television Vancouver (2009-2011) and was on the Board of Directors since 2007.  I was instrumental in bringing a Production Manager Mentorship that was partnered with William F. White to the organization in 2011. I wanted women to get this opportunity here. The last thing I did “American Mary” just finished post production –horror/thriller film. Line producer and co-producer. Directed by Soska Twins (Jen & Sylvia).

How long does it take to put a film together?

You get a project you like that attracts me to get together. Could be 3-5 years to get the whole film done from start to finish.

How do you look for money as a Producer?

Ideally you would look for pre-distribution sales, private investors, government financing, or partnering with another company to produce the project with you.

Based on your involvement with Women in Film, has this broadened your career?

Being on the board was a great experience and it allowed me to meet people I didn’t know prior. If I can help in my producing career support other women directors then that is great for me.

I have to see if the story resonated with me, who the creative person is and if I like that person. Finding something I like and am passionate about. I have to believe in it to sell it.

What is in development?

1)    “The Saviour” feature film by Elizabeth McKay (writer) an action drama about the war in El Salvador in the 1970’s.

5)    I would like to find one or two other properties to do.

If I could make one film in my entire life along the lines of Shindler’s List, The Shawshank Redemption or Life is Beautiful, I would be very happy to make a film that affects people the way those films do that stay with you.

3)    Working on getting the play done

WIN Prizes in the Poutine Contest