For my seventeenth brunch in this series, I was joined by Music Composer/Producer Marcelo Trevino at Biercraft in Vancouver talking about Music, Scoring, Songwriting, and more! 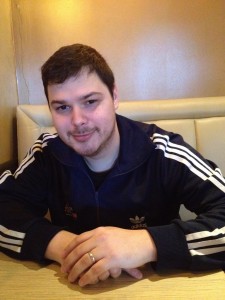 Marcelo Trevino was born in Monterey, Mexico; best known for teaming up with Mexico’s leading and Grammy Nominated alternative rock band Panda as arranger and on tour keyboard player, is a Berklee College of Music Film Scoring and Songwriting graduate (2000, 2001).

At 8 years old, I played piano with my dad, I was always interested in music, wrote improvised songs on the piano and loved music.

How did you end up choosing the career that you are doing?

My parents were supportive in recognizing that I was passionate for music. They supported me in my choice to further music which I persued by going to Berklee College of Music in Boston. I attended the college when I was 19 years old and took “Intro to Film Scoring” as well I majored in film scoring & song writing.

Have you always wanted to be a Composer? 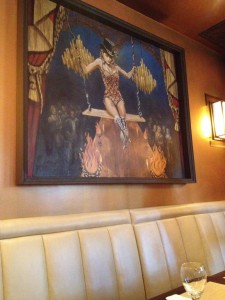 I think it has, the band influenced a lot of my musical taste from Romantic to adventurous and textural more alternative preferences. Previously I was more into romantic pop. In film scoring I am always looking at new composers.

What prompted your recent move from Mexico to Vancouver?

Vancouver is a beautiful city and this is where I always wanted to build my family. The video game industry is huge here and there are opportunities for me to work my music for the gaming industry as well as the film industry here.

Are you working with Canadian production companies scoring for films here?

The idea is to do just that, I am hoping to work with a management company to score music for the films here. 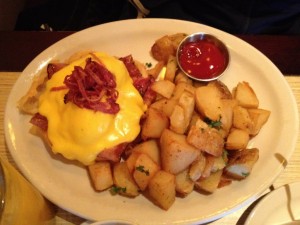 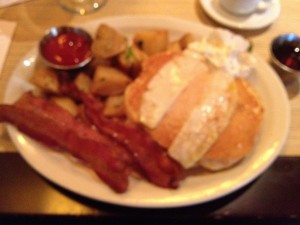 Marcelo had an Americano and an Orange juice, he then had the Eggs Benedict with black forest ham ($12) On a croissant, served with house-made hollandaise, hash browns & a side salad. Richard had the Tropical Pancakes ($12.50) with coconut served with crispy bacon and potatoes; he also had an Espresso Macchiato.

Do you come from an musical family?

Yes, my dad plays the piano, my mom sings and plays the guitar. My brother and sister both play music. I was the only one who took it into a career.

Where was your recent musical trip?

Peru with the band “Panda”.

How do you get the inspiration to compose music?

For tv & film – I follow through with my ideas. I draw from characters and storylines musically. Then I find the themes that fit and move forward. I have to trust what the film makes me feel.

For the band – most of the arrangements I did were based on the framework the style had. Harmonic, melodic and stylistic was defined. You have to go with what the song says, more focus of what the band is making the song work arrangement wise.

How long does it take you to score a tv episode?

How long does it take you to score for film?

For film it goes on for 2-3 months and I usually work with the Film Director or Producer.

What is next for you on the Horizon?

3)    Continue to do music for advertising agencies and promotional campaigns

4)    Score music for the sports team “Rayatos” in Monterey, Mexico