For my seventh brunch in this series, I was joined by Artistic Director – Max Reimer at Dockside Restaurant on Granville Island talking theatre, acting, dancing, food and more! 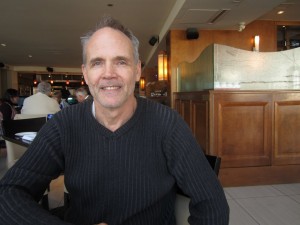 Max is the Artistic Managing Director of the Vancouver Playhouse Theatre Company, he is also an actor, dancer and event producer. I have attended many of his theatrical productions over the past couple of years. He recently joined me for the Jazz Blues Brunch at Dockside Restaurant in the Granville Island Hotel.

In 1980 I started at The Arts Club dancing and acting in ‘Pipin’ musical that toured through-out Canada. In 1985 working in the Stratford festival.

How does one become an Artistic Director of a Theatre Company?

In my case, I was pursuing a business/legal career – while performing also produced small stage plays, large events including the Gay games. Combination of business and arts that put me in the Helm.

I accept auditions more than any other artistic director of a theatre co. I try to see everyone who submits.

Now in the fall of 2011, I have to secure rights to be finalized by end of 2011 to launch in the spring of 2012. Alligning themselves with other theatres across Canada.

How did the Vancouver Playhouse Vancouver International Wine Festival get its start?

It was started 35 years ago as a fundraiser to support the Vancouver Playhouse Theatre Company. It all started with the Bacchanalia Gala with a wine auction that grew to an international top wine festival. The festival provides over half of private sector fundraising to our organization.

Why aren’t there any plays performed during the Vancouver Playhouse Vancouver International Wine Festival?

Eventually the wine festival will bring in a theatrical component to the festival, we have been trying to do this for some time, however venues have been difficult to arrange. 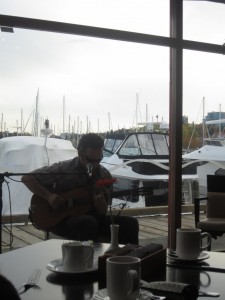 Crepe with bacon, peaches and ice cream (has a heritage side to it –Mennonites would make crepes and I stumbled on bacon and mushrooms combo and I make my own syrup. 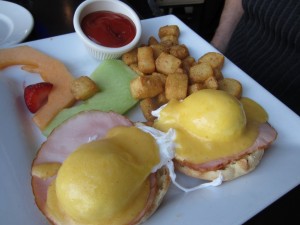 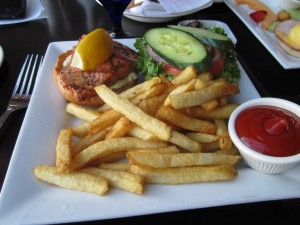 How many productions will you produce this year?

We have 6 productions along with 4 co-productions including the Childrens Festival featuring Fred Penner and Jay Brazeau.

Yes the Fringe Festival curates for the Playhouse; in fact “The Exquisite Hour” is going to be performed in the recital theatre which is located under the Playhouse in an auditorium that seats 100 people.

What is your favourite all time play?

In your travels, which was the most recent favourite play that you have seen?

Calgary – I directed a play 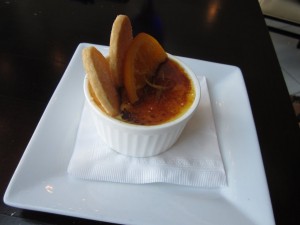 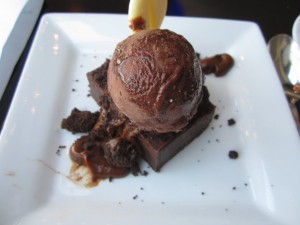 For dessert, Max had the Crème Brulee ($9) and Richard had the Valhrona Manjari Dark Chocolate Pate ($9).

What do you want to accomplish with the Vancouver Playhouse Theatre Co over the next few years?

Producers –people that bring audiences and the art together. They need their work introduced on the main stage.

What makes a good production?

Theatre is an audio experience, terrific writing, brilliant use of English language. Art of theatre is art of compassion – audio experience. It’s about the idea and the word. Au auditorium is a place to hear something.

Why turn the phone off in the theatre?

Eventually the cell phone will be a useful tool for hearing impaired, language challenged in the theatres.

How do you go about building a stage for a play?

Sometimes there is budgetary constraint and the other is about artistic ambitions.

How does a co-production work such as Tosca Café?

Tosca Café was co-produced with Theatre Calgary with the same actors in Vancouver, this allowed us to share the costs of production values. This production first played in Calgary then in Vancouver.