For my fourth brunch in this series, I was joined by Grammy Award winning conductor, composer and performer Bramwell Tovey of the Vancouver Symphony Orchestra at Provence Marinaside talking music, food and more! 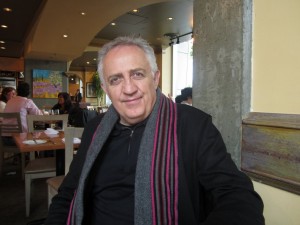 GRAMMY® Award winning conductor Bramwell Tovey’s career as a conductor is uniquely enhanced by his work as a composer and pianist, lending him a remarkable musical perspective. His tenures as music director with the Vancouver Symphony, Luxembourg Philharmonic and Winnipeg Symphony Orchestras have been characterized by his expertise in operatic, choral, British and contemporary repertoire.

Mr. Tovey who is in his twelfth season as Music Director of the Vancouver Symphony, also continues as Principal Guest Conductor of the Los Angeles Philharmonic at the Hollywood Bowl, and as founding host and conductor of the New York Philharmonic’s Summertime Classics series at Avery Fisher Hall. In 2008, both orchestras co-commissioned him to write a new work, the well-received Urban Runway, which has also been premiered in Canada.

An esteemed guest conductor, Mr. Tovey has worked with orchestras in the United States and Europe including the London Philharmonic, London Symphony and Frankfurt Radio Orchestra. In North America, Mr. Tovey has made guest appearances with the orchestras of Baltimore, Philadelphia, St. Louis, Pittsburgh, Detroit, Seattle and Montreal as well as ongoing performances with Toronto, where his trumpet concerto, commissioned by that orchestra received its premiere in winter of 2009 as a preview of his first full-length opera “The Inventor” premiered in Calgary in winter 2011.

Mr. Tovey has also built a strong reputation as an accomplished jazz pianist with two recordings to his name and has made memorable appearances on television, including two documentaries with the City of Birmingham Symphony Orchestra and a 1996 CBC TV broadcast of Victor Davies’ Revelation, a full-length oratorio based on the Book of Revelation, with the Winnipeg Symphony Orchestra. He has an extensive back catalogue including recordings with the London Symphony Orchestra, Halle and the Royal Philharmonic Orchestra He has also recorded several DVDs, of works including Holst’s The Planets Suite and Beethoven’s Eroica Symphony as well as a solo recording with distinguished guests such as percussionist Dame Evelyn Glennie, among many others. His recording with the Vancouver Symphony and James Ehnes of the Walton, Korngold and Barber concerti received both GRAMMY® and Juno Awards in 2007.

I first met Bramwell while dining at a restaurant in Whistler in September, he recently joined me for a wonderful brunch at Provence Marinaside in Yaletown.

I wanted to be a conductor at about 8 or 9 years old. I never knew if I was good enough. after a 10 year learning period, at 19 I auditioned for the Royal Academy of Music.

What brought you to Canada?

I worked on Royal Opera stuff in England in Sadler’s Wells world ballet and did a 2-month tour of Canada, which I loved very much. Then a little later I was offered a position with the Winnipeg Symphony and accepted and then moved to Winnipeg in 1988.

It’s a huge responsibility working with musicians with great talents, also dealing with aspirations of members of the orchestra, taking great care of musical leadership, fundraising, and education. It’s like leading a major corporation.

Although I prefer peace and quiet when I am at home, there are some musicians that I love and those include Jamie Cullam, Tony Bennett, Ella Fitzgerald, Oliver Jones, Oscar Peterson as well as Cole Porter and the music of that era. 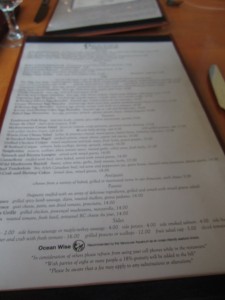 Bramwell had the Tomato Soup (special of the day) $9 to start along with a coffee and an orange juice, while Richard had a double espresso.

Often I am in need of enjoying a meal in a quiet restaurant and as I mentioned I love Indian food. Handi on Dunbar is my favourite Indian restaurant here.

Cafe Fiorello in New York is my favourite restaurant outside of Vancouver. 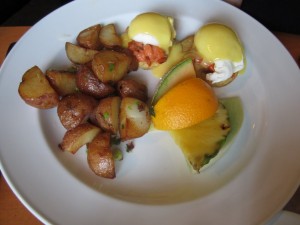 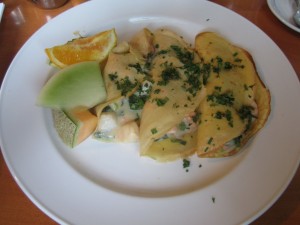 Read – I have a huge library of fiction and non-fiction- walking and playing cricket.

With the orchestra, typically how many rehearsals do you have before a concert?

4 or 5 usually, the orchestra has every Tuesday off. If a concert takes place on a Wednesday then we often will only have 2 rehearsals.

Are you still working at the Hollywood Bowl?

Yes and I love it.

The last 100 years mostly as well as the Classical and Romantic era.

A piece by Schnurrenberger called Gurrelieder which has several soloists and a big orchestra. Unfortunately the stage in Vancouver is too small to perform this piece.

How far in advance do you plan your seasons? 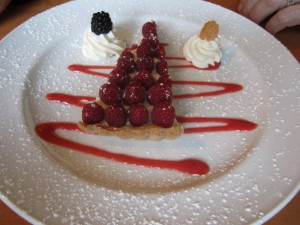 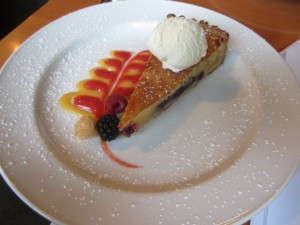 For dessert, Bramwell had the Raspberry Marscapone Tart ($9) – special of the day- and Richard had the Berry and White Chocolate Clafoutis ($9).

The last concert of the season, we are planning to record the opera that I wrote “The Inventor’.

We are going to the western USA in 2013. To do an International tour it requires our governments to have a cultural export interest in that region, also requires business leaders on our side.

Besides Vancouver and Los Angeles, how many international concerts do you do a year?

About 50 concerts, this past summer I conducted my 100th performance with the NY Philharmonic as guest conductor.

If you were playing in the orchestra and not a conductor, what musical instrument would you play?

Probably would have been more of a composer and wouldn’t have played in the orchestra.

I grew up in the Salvation Army and everyone was an amateur musician.

Outside of conducting and your musical career, what else do you do?

How do you get inspired to compose new works?

Recently I was reading a book of poetry by Dorothy Parker (Pictures in the Smoke) and while reading, it instantly hit me and I wrote a piece for brass, percussion and piano. It’s been played all over the place. I like to take selections from books I have read.

The day after Labour Day, I was conducting the Los Angeles Philharmonic with 4 concerts of Mozart’s Requiem.

To London to make a CD recording of the National Orchestra of Wales with the BBC. Then flying back from London to Vancouver to have dinner with my kids, then the same night flying to Melbourne, Australia to perform concerts and then to Perth to perform more concerts.

When do you do your writing of compositions and playing?

I usually write works and the play the piano from 6am for 2-3 hours.

If you could offer any advice to people wanting to become Conductors, what advice would you give them?

Be prepared to work 20 hours a day. It’s like being an artist, academic and entrepreneur all rolled into one.

Define your objectives and be prepared to practice to achieve those goals. Then it’s a combination of lottery and talent.