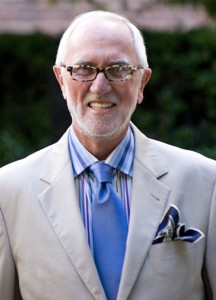 I sat with Bud last week at this office talking about the restaurant biz and his love for welcoming people.

I like doing a ballet on a high wire, lots of concept, food and HR; work at hiring for inate hospitality (the colour), décor, the buzz, marketing, cleanliness, financial management, and curb appeal.

When growing up, did you ever envision yourself as a leader in the restaurant industry?

No, I wanted to be an architect. I satisfied that desire by building 11 restaurants.

What is your passion outside of business?

After so many years, what happened to The Cannery?

They closed in 2010, then I bought back the trademark and database which we are currently using to grow our Goldfish business.

I imagine over the years you have had many good and bad experiences in your job, Tell us about a few of the most interesting experiences.

Here are a few anecdotal events of interest in the Joe Fortes mainly:

Arnold Swarzenegger was filming an action movie a few years ago, helicopters and assaults etc. He usually stayed at a Hotel nearby and loved to come by and relax with a Cigar on the Roof Garden late at night. One evening, Debbie one of our Christmas decoration ladies was attaching Christmas lights and Garalands along the rail going down the stairs when Arnold came down and stopped and asked what she was doing.  She stood there with her mouth gaped open, knowing this famous man was talking to her.  She obviously explained that she was preparing for Christmas and making the place look festive.  He smiled and said ” I’ll be back to see the finished result”

Later as Governor, he asked his asst to call Frenchy ( Maitre’d/Partner) to see if he could come in for lunch.  His retinue included 6 FBI and 6 RCMP, just so he could have lunch.  As usual Frenchy had a Monte Cristo cigar waiting for him, for which he was over the top grateful, as Cuban cigars are not available in the US.

So he has been back on a numerous occasions.

The Sharon Stone story is that she was coming down the stairs from the mezzanine when a customer seated at the bar, had his eyes bug out when he saw Ms Stone. To the extent that he fell off his chair and had a mild seizure.  Sharon’s sister, a nurse, sprang up and gave him CPR and got him calmed down.  One thing she did notice that his excitement was noticeable in a different place.

Tommy Twist a St Louis hockey player had an annual Motorcycle fundraiser ( twice held at Joe Fortes) with John Elway as MC, Tom Arnold in attendance and Leslie Neilson, a long time fan of Joe Fortes and particularly of Frenchy, dropped in. When the kids heard Tommy was at Joes, the line up to get in an see him ran all the way down Thurlow St past MacDonalds.

The event was a Charity fundraiser at $ 150 a plate, autographs for everyone, auction items and the first tired motorcyclist to fall asleep paid the entire dinner bill.   At least $ 25,000

Our own Oyster Bobby, winner of Canadian Shucker of the Year and numerous other oyster shucking competions prides himself on having a hair trigger action-wise.  Also a hockey player of some repute, he observed a passerby remove a purse from the chair occupied by a  woman at the Oyster Bar. In a split second Bobby ducked under the oyster bar access and took chase of the perp up Thurlow St. Within 2 blocks he tackled the thief and grabbed the purse back, returning to the restaurant to give it back to the woman guest.  An example of going beyond the call of duty.  But for an athlete and someone who loves his guests, no problem, all in a days duty.

Hockey Rookie Dinners.  It is the custom for the Rookies to buy the whole team a dinner when they hit Vancouver town.  We have hosted Rookie dinners for Dallas, Anaheim, Vancouver, Ottawa and Chicago to name a few.  The typical tab is around $ 28,000 that the new rookies must share for the 30 or so associated team members.  Always a memorable and well fueled night. Something Joe Fortes is renowned for.

What are the top 3 Wines (your favourites) would we find in your home collection?

Grilled fish –could eat that every day

Be really, really prepared in a broad way. Chef opening a restaurant often is a disaster you have to know about leadership, follow the vision, be well trained or don’t open.

For Goldfish – broadening awareness, more variety of seafood, oyster bar, lobster tanks and adding some Cannery favourites to the menu.

What is it that keeps your long standing staff with you for so long?

Work on our culture, coaches with our management teams and it trickles down, we empower people.