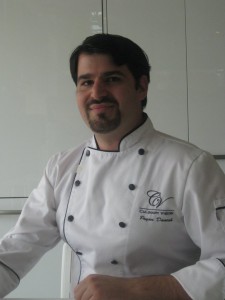 I sat down with Poyan at Miele last week whom I met for the first time and talked about his passion for cooking, competitions, leadership and excelling in the culinary world.

Poyan is chef of Culinary Vision, his own catering and consulting company, he is also currently the Chef at Miele in Yaletown. In 2007–2009, Poyan was Chef de Partie at the Pear Tree Restaurant in Burnaby. He has been awarded many medals in culinary competitions around the world, in 2010 as a member of Team Canada he won Gold and placed 5th overall. He placed fourth in the country in Global TV’s 2007 Season 2 series The Next Great Chef. His first international gold medal as a Team Canada competing Support Member at the 2006 Luxembourg competition. Poyan won his first grand gold competing as a first-year apprentice, in the professional category, in the 2005 BC Chefs Association Culinary Salon. He is a graduate of the Culinary Arts Program at Vancouver Community College.

Have you always had an interest in cooking?

After high school I took Chemistry, Calculous and Pyschology, my first job was at Trolls Restaurant in Horsehoe Bay to pay for Dental Hygene school. One day when I was hiking the Westcoast Trail I had a life changing experience and decided to change directions and go to Culinary school, I had an interest in cooking and never looked back.

I push myself cause I know how to give back to the community especially to do the Juniors, I have been a restaurant chef, hotel chef and now a corporate chef.

What piqued your interest in competing in culinary competitions?

a)    The number of people asked, is an honour to be asked.

b)   I love the ‘push’ for stressful stuff, learning was available to me so I went all out for it.

Where was your first chef position after graduating from culinary school?

Sutton Place Hotel part time while I was going to school and I was then hired at the Marriott Pinnacle Hotel where I apprenticed after finishing school.

I think everyone should try it once, for chefs that you push who can achieve results, these are the people who succeed.

At least a practice (3 days) with the team each month, you own practices here (20 hours per week). Looking at photos and thinking takes more time, being financially dependent at times takes time as well and family support.

In school, I saw an opportunity to get on board as a Junior Chef to meet chefs, to compete regionally, attend their monthly meetings, field trips to farms for learning, connections and to think outside the box.

Luxembourg – competing on the national culinary team, placing 5th place for Canada, with 2 gold medals for our team in November 2010.

To keep our standards, to keep chefs motivated to understand why people want to eat the food that they do. In my most recent job I was managing 18 kitchens “corporate business offices”.

Tell me about your involvement in the Chefs Convention being held in Vancouver in June 2011?

Chairman and organizer of all the meals happening at the hotel and coordinating all the donated products. Three main chef competitions coordinator and the Presidents ball coordinator.

I understand you have had your hands in the menu creating for the 2011 Chefs Convention, what has that role entailed?

Making sure these world chefs are showcasing BC products as much as possible, produce the best meals possible using donated product.

I understand you are organizing three big culinary competitions in the 2011 Chefs Convention, what are those five?

What do you currently do by day and by night in the culinary world?

By day, Culinary Development Chef for Frobisher International (seafood importing company) – making sure they are Ocean Wise and sustainable. By night, organizing competitions, Team Canada’s needs, convention stuff and participating in the Chefs Run for the Heart.

When they are starting out that they cover their base knowledge, before they do their techniques like suvee. Foundation is the most important and the key.

Put yourself out there, try to have an open mind when learning from different chefs. Don’t ever take one way being the only way to do it, make your judgement call later. Every chef has a different technique.

What would you like to see come out of the Chef Convention?

I would love more people to be exposed to the teaching and knowledge for people who want to learn.