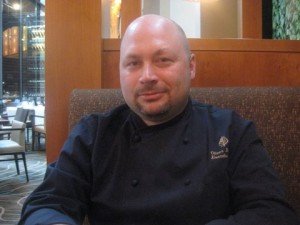 A few weeks ago I spent the afternoon with Chef Oliver Beckert at YEW Restaurant in the Four Seasons Hotel Vancouver.

Oliver was born and raised in Nuremberg, Germany. He worked at a restaurant when he was 16 years old for a couple weeks as a trial during the summer. He then worked at a restaurant in Nuremberg where he apprenticed for 3 years. Afterwards he worked at Bellevue Palace in Bern, Switzerland for 18 months as a cook. He then went to New York on vacation with his Aunt and ate at many of the fine eateries, he loved NY and wanted to find a way to work there. He applied at the top hotels and at 23 he was hired by Hotel Pierre (Four Seasons) where he worked for 18 months and then transferred to the Four Seasons in London for 2 years where he specialized in fine French dining as their line cook he was then promoted to Junior Sous Chef. He moved to Washington, DC and worked at the Four Seasons for 4 years as the Executive Sous Chef. Oliver then moved to Miami for 2 years to open the Four Seasons Hotel (it was an eye opening experience) as the Executive Sous Chef, he then moved to the Four Seasons in Lanai, Hawaii for a month and was then offered the Executive Chef position which he accepted and spent 4 years as he oversaw 7 restaurants on the property, he wanted a change and there was an opening in Vancouver, he joined the Four Seasons Hotel in Vancouver in January 2009 as their Executive Chef.

Did you ever think you would only work in hotels?

Describe your role as Executive Chef at the Four Seasons Hotel Vancouver.

I run YEW Restaurant, banquets, room service and offsite catering. Lots to oversee including 3 Sous Chefs. 20% of my time is devoted to cooking while the rest is managing people, admin and ordering. 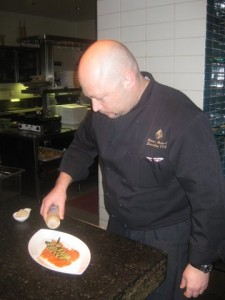 What are the differences between working in your role in Hawaii vs Vancouver?

In Hawaii, I spent much of the day on a golf cart checking each of the 7 restaurants, the environment was tropical. In Vancouver the set-up is very different and of course the weather here is different too. 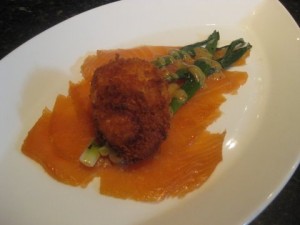 Smoked salmon in Vancouver us unbelievable, I had the egg before in New York, I played with it a bit and decided to go with it and charred the green onion. 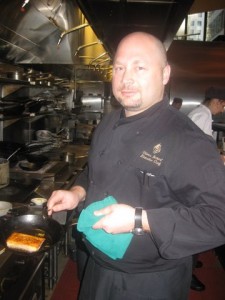 Who does the cooking at home?

My wife is a fantastic chef and she does the cooking at home.

Depends on my mood from Asian to Italian.

Hiring staff and finding the right people to be part of the team, developing new menus and dishes, the seasons with different foods available.

How did you Olympics menu appear?

We held at brainstorming meeting once a week and we came up with our Olympic menu, it was very successful and the restaurant was packed during the Olympics.

What is your favourite dish to make (in the restaurant)? 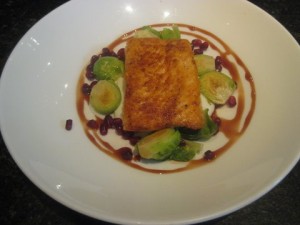 What’s in season in the winter, combination of flavours that are good for you. 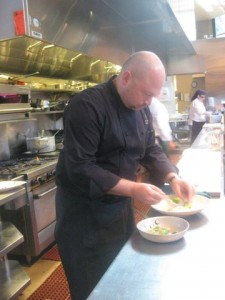 How do you develop your monthly special menus?

Our monthly special in YEW Restaurant is always $35 for 3 courses which can be paired with wines for an extra charge. I usually develop the menu with my restaurant chef and our pastry chef, our focus is often local.

If there is anything you would do different what would you do?

I would want a larger kitchen, add a chefs table and more prep space.

Where is your favourite cheese from?

Farmhouse Cheese in the valley.

Where are you going for your next vacation?

I am going to stay home and see BC, I am planning on renting an RV and then drive around BC to meet the producers and visit wineries in the various regions around the province. 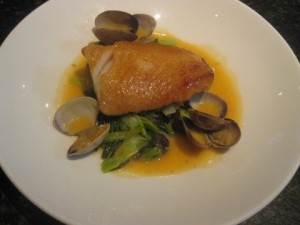 I wanted to Miso something with a good fish, local and seasonal ingredients using Asian techniques.

What is the unique spice that I tasted in the Sablefish dish?

It was Kansuri Paste, a Japanese spice that I added to the dish.

Hawaiian Ahi Tuna or BC Salmon

I will be somewhere in North America – Vancouver and beyond.