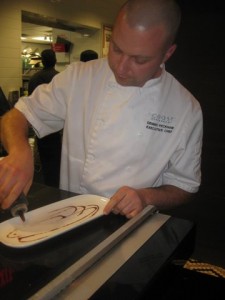 I recently spent the afternoon with Chef Dennis Peckham at Coast Restaurant in and out of the kitchen. I had the pleasure to meet Dennis in the summer of 2010 when he was working with Chef Josh Wolfe at Coast. I have dined at his restaurant on numerous occasions. It was a pleasure to chat with him about his passion for cooking and leadership.

Dennis worked in construction in the past, he then got a job washing dishes at a golf club in Victoria, then got into prep and on as a line cook. He then went to Dubrelle for their culinary program in Vancouver and then moved back to Victoria for a year. In 2002 he got a job as the Chef de Partie at Lumiere in Vancouver and was there for 2 years. In 2004 an opportunity came up and he left to work for Charlie Trotter in Chicago, from there he was offered a position at French Laundry. He then worked at Perse in New York City for 2 months opening that restaurant where he learned a lot, he then went to California and worked at French Laundry for a year. In 2006 he returned to Vancouver to become the Chef de Partie at West working with Chef David Hawksworth, there for a year and then off to Hart House to become their Executive Chef where he was until 2008. He then joined Coast as their Chef de Cuisine and in 2010 was promoted to their Executive Chef.

What is it like to run the largest restaurant in the Glowbal Group?

After I worked with Chef Josh Wolfe for 3 months learning to run a business efficiently, he learned how to prioritize my day that was the biggest task. You can’t stress out, you can’t micromanage, you have to manage, delegate and trust the team. 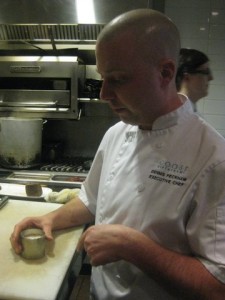 How many people do you oversee in the kitchen?

Only simple stuff, on my days off I go out to eat. 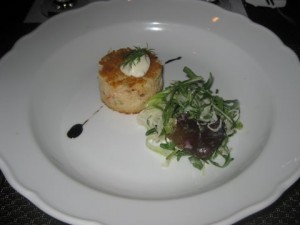 The dish represents the restaurant perfectly, all seafood and it has been on the menu since day 1. 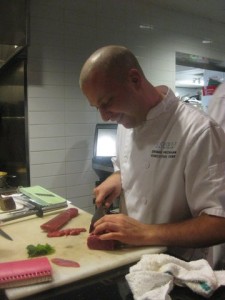 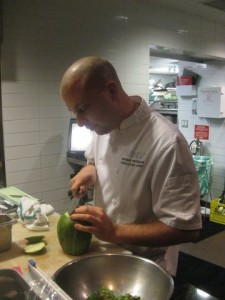 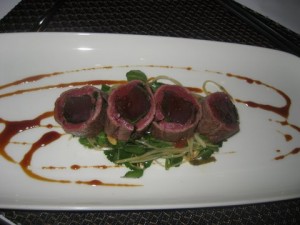 Reminded of Sushi I had earlier in the day, it came to me as someone requested a custom dish.

What’s a challenge for you at work?

Balancing, keeping the staff happy, me happy and my bosses happy.

How do you maintain consistency in the restaurant?

You can’t catch everything, I can’t see everything, having the management team understand your expectations in the restaurant. 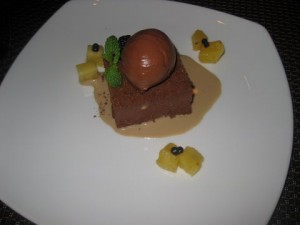 Chocolate Cheesecake with espresso sauce and cream and pineapple

It was a dessert that was actually created by Chef Alfred Contiga.

Where do you see yourself in 5 years?

Have you ever thought of competing in a culinary championship?

Yes I would love to compete in the Golden Plate Awards next year.