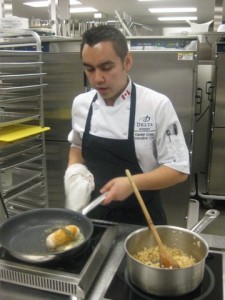 A couple of weeks ago I spent the afternoon with Chef Dan Craig at EBO Restaurant in the Delta Burnaby Hotel. I had the pleasure to meet Dan in December when I dined at his restaurant and attended a chocolate truffles making class with his pastry chef. It was a pleasure to chat with him about his passion for great food and culinary championships in Canada and around the world.

While Dan was going to highschool in Ontario he got a job washing dishes at a friends deli, they needed help in the kitchen and he progressed from dish washer to cook. He moved out West and took a job in Victoria at the Empress Hotel as the 3rd cook for 6 months, then a friend offered him a job at Japanese Village where he worked as a Teppanyaki Chef for 1 year. He loved cooking and decided to go to culinary school, he enrolled in Camosun College and took the Chef program for 1 year, he then apprenticed at the Delta Ocean Point Resort for 5 years. An opportunity came up to compete in a prestigious culinary competition, he ended up winning a string of competitions which then sent him on a journey to Australia where he worked on the Gold Coast at a resort for a few months. From there another opportunity lead him to work at one of most renown restaurants in Sydney at Tetsuya’s, and then a cook job at the Four Seasons Hotel in Sydney. Back to Canada, a friend called him and lured him back to Victoria to work a cook position at the Westin Bear Mountain Hotel in Victoria. Then to France (prize from the culinary competition) he spent 5 weeks in Paris staging and eating. Dan was then was lucky enough (Bruno Marti helped him) to get a job in l’Abbaye Saint-Ambroix 2 Michelin star (2 hours south of Paris) and he worked for 1 year as Chef de Partie. Then back to Canada where he joined the Delta Hotel Burnaby 3 year ago, first he was as the Banquet Chef and then promoted to Executive Chef 7 months ago.

How did you get involved in culinary competitions ? 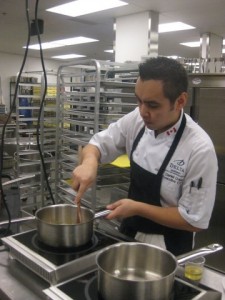 Would you compete again in another culinary championship ?

Yes, I want to compete in the Bocuse d’Or.

What did you want to do growing up ?

I did not know, I was just lucky to get a job in highschool that lead me in this culinary direction. 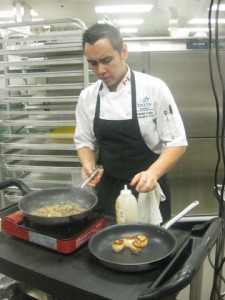 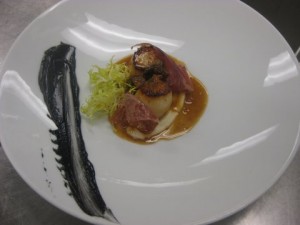 Showcase Ocean Wise scallops, classic flavour combinations, conceptionally everything was on point together. 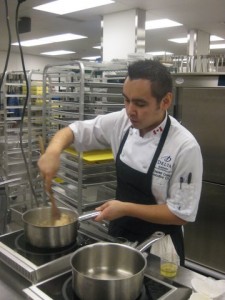 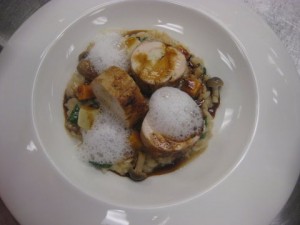 On the Fall menu, warming comforting plate of food, leeks and mushrooms

What is the style of cooking at EBO Restaurant?

Who are some of your great local suppliers in the region? 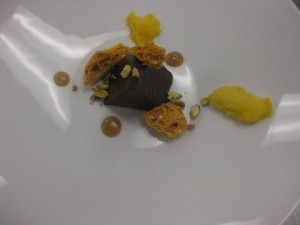 Working in a small independent restaurant whether it is my own or being in an Executive Chef role.

What is your role as Executive Chef at the Delta Hotel Burnaby?

What are your favourite desserts to make?

Dining Out for Life