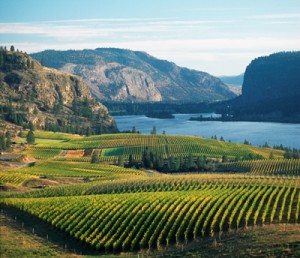 Join us on Monday, January 17, 2011 for an evening celebrating the premium wines of BC’s Blue Mountain Vineyard and Cellars.  The event will be grazing style which will allow guests to wander the room sampling wines paired with cuisine from twelve of British Columbia’s top restaurants.

Many of the wines being served at this event have not yet been released by the winery and will be the first opportunity for guests to sample them.

The event will be held at Vancouver’s prestigious Four Seasons Hotel, which is conveniently located close to the Pacific Centre SkyTrain station and Canada Line.

Blue Mountain Vineyard and Cellars is a family-owned winery in BC’s Okanagan Valley and is distinctive among Canadian wineries in that all its wines are produced exclusively from grapes grown on the estate’s vineyards.  Ian Mavety purchased the land which is now Blue Mountain Vineyard in 1971.  Current owners Ian, Jane, Matt, and Christie Mavety continue to work to realize the potential of the region, utilizing sustainable farming methods and winemaking practices.  Celebrating the 20th anniversary of its first vintage this year, Blue Mountain continues to offer complex and cellar-worthy varietal wines.

Proceeds from the event will support the charitable work of the British Columbia Hospitality Foundation (BCHF), which offers scholarships to students enrolled in Hospitality programs and financial assistance to those employed in food, beverage and hospitality professions when facing financial hardship due to critical medical needs.