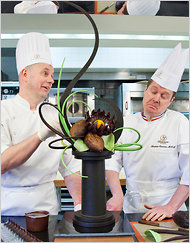 Colour, 35mm, in English and French with English subtitles. 87 mins.

Kings of Pastry takes audiences into France’s prestigious Meilleurs Ouvriers de France (Best Craftsmen of France), an intense, high-stakes pastry competition that “combines the skills of a baker, the vision of an abstract artist and the hands of a bomb diffusion team” (San Francisco Chronicle). Pacific Cinémathèque presents the Vancouver Premiere and Exclusive First Run of this never-before-filmed test of France’s finest artisans, revealed by documentary veterans D.A. Pennebaker and Chris Hedegus, makers of The War Room and Dont Look Back.

This is nothing less than the Olympics of pastry. The film follows several elite pastry chefs as they embark on an intense, remarkably nerve-wracking three days of mixing, piping, sculpting, and sugaring. The blue, white and red striped collar worn on the jackets of the winners is more than the ultimate recognition for every pastry chef — it is a dream and an obsession. The finalists risk their reputations as well as sacrifice family and finances in pursuit of this lifelong distinction of excellence. You’ll be astonished that so much drama, suspense, humour, and heart-wrenching emotion are to be found in competitive pastry-making, and “by how devastating the collapse of a chocolate tower can be” (New York Times).

For more information on the film, visit www.cinematheque.bc.ca/kings-of-pastry