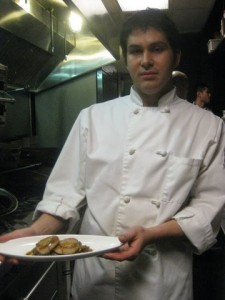 I spent the afternoon recently with Chef Ben Berwick at Hapa Izakaya in Kitsilano. I have known Ben since last summer when he participated in our Vancouver Foodster 1st Anniversary and have had the pleasure to chat with him about his passion for sustainability, his heritage and most of all his love for food.

On this visit Ben cooked up a couple of his signature dishes for me to taste, cooking with Ben provided the perfect setting to dish with him and chat about his cooking, and about his winning the Ocean Wise Chowder ChowDown the night before! 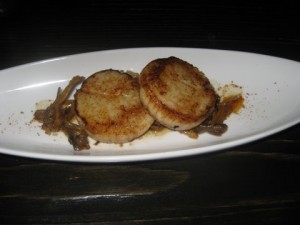 Perfect technique, and having the right ingredients on hand.

How long did it take you to create the recipe for your winning chowder in the 2010 Ocean Wise Chowder ChowDown?

I had two days to create the chowder, I wanted to have a Japanese chowder and the best way is using Dashi, it is a fusion between Western culture and Japanese culture. I was able to use the best local ingredients including Halibut and Scallops with the best technique, I also added 7 spice to give it a kick which really made the chowder.

Have you ever competed in a competition before?

This was my first competition, I never really liked to compete with food, cause I felt so passionate about creating food for people to eat.

I am impressed you won both categories in the Ocean Wise Chowder ChowDown including the top prize as well as the Peoples Choice, would you consider another competition in food?

Yes, now I would like to compete in another Chefs competition, you never know what comes up. 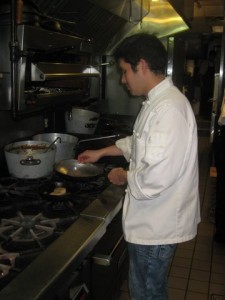 Did you always want to cook in a Japanese restaurant?

Japanese cuisine is natural to me, I love the flavours, I got started on the chef path when I first worked for Zen Restaurant in West Vancouver, Nobo the owner is my Mentor, he taught me how to make sushi, I then worked for Chef Scott Jaeger at the Peartree Restaurant In Burnaby, then I moved on to work at Glowbal Groups Italian Kitchen where I was the Sous Chef, then I joined Hapa Izakaya as the Executive Chef at their Kitsilano restaurant. 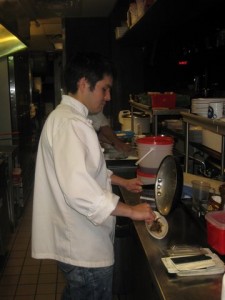 Have your always wanted to be a chef?

Growing up food was always a big part of my life, my father is Jewish and my mother is Japanese, I spent the first 9 years of my life living in Japan and then the rest growing up in North Vancouver. As I said I love food and it is the best way to change the world and I am quite passionate about it. 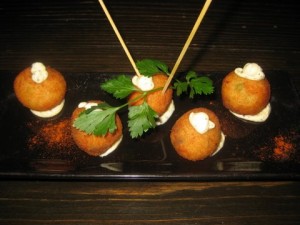 This dish was born from my not liking to have anything go to waste, that is my philosophy, the salmon was scraped of the bones and the risotto is made with Dashi and then I created this dish.

Do you have the freedom to create new dishes at your restaurant?

Yes both me and Chef Daiji create most of the new dishes that goes on the Kitsilano locations menu. Each Hapa restaurant has great talents in the kitchen, creating this amazing culture. Hapa started multicultural izakaya in Vancouver whiches takes in Vancouver culture and expresses that into our food and restaurant.

What are your three must have ingredients in a kitchen?

What is your favourite cuisine to cook at home?

What are your top five food cities in the world?

You have mentioned Dashi a lot, what is Dashi?

It is Bonito Flake, Sea Kelp and Water and their a method to making good Dashi.

If there was a different style of cooking you could do what would it be?

Where have you had the best Dining experience in Vancouver?

What is your preference between White & Brown rice?

I prefer white over brown rice.