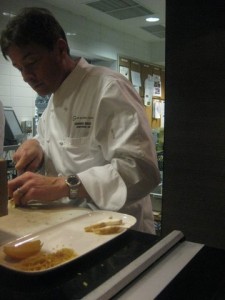 I spent the afternoon recently at Coast Restaurant with Darren Brown, he is the Corporate Chef for Glowbal Group Restaurants. I have known Darren since last summer when he participated in our Vancouver Foodster 1st Anniversary and have had the pleasure to chat with him about his passion for food, travel and all things culinary.

I asked Chef Darren Brown to go into the kitchen and make me one of his signature dishes, I kind of put him on the spot to make a dish on the fly and within minutes he took to the preparation area and to the stove. Since we did this interview at Coast restaurant, he chose to make me a seafood dish. 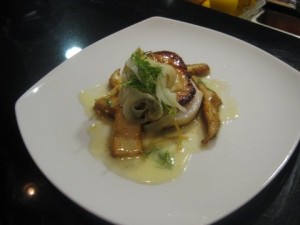 What was your inspiration to create this dish?

Playing with pine mushrooms as they are in season currently, the scallop holds its own with the pine mushrooms it works perfectly, the preserved lemon comes through and it is a perfect complement to have the fennel.

How do you create a new dish for any of your restaurants?

First off I would ask the chef to create 8 dishes, then I look at each of them with Emad, we then work with the chef and the restaurant team and on the dish individually on the technique, refinement and how the dish fits Emad`s concept then that sets the bar for adding the dish.

How long does this process take?

Adding a new dish can take 3-4 months to add any of our menus, however we try to do it in 1-2 months on quarterly seasonal menus. For features we let our chefs come up with their own dishes. 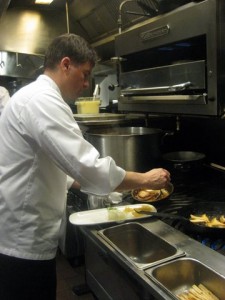 What have you done during the past year in your role as Executive Corporate Chef at Glowbal Group?

I opened the new Coast Restaurant on Alberni (June`09) after spending a few months preparing the chefs team for opening, two and half months later I opened Society in Yaletown, then I redid Glowbal in Yaletown and turned it into a steakhouse. Then we put in a Mozzarella bar in Trattoria in Kitsilano and then redid the menu at Sanafir and added Tapas & Ceviche bar.

We are putting in a Mozzarella bar at Italian Kitchen and then we are going to redo the menu at Society, then I believe there will be some new projects coming on. 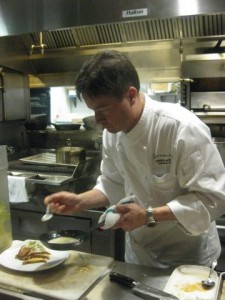 Are you opening any new restaurants in Glowbal Group anytime soon?

Maintaining continuity is very important in growing the company and the restaurant culture, this comes first and foremost before we can open our next restaurant.

If you were hiring a chef from outside of your company how would you do it?

Anyone who approaches me to work at our restaurants must have the technical skills as well as understanding the food and having a scope of experience in food, they should also have an interest in administration and finance.

Are chefs approaching you for jobs all the time?

In my roll I do receive applications from chefs and staff day in and day out. 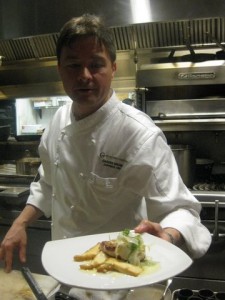 Spanish, Basque cooking and basically anything that is coastal Mediterranean

What are your 5 favourite ingredients to cook with?

Espiette chilli, duck, chorizo sausage, any part of a pig and musovada sugar

What is your favourite restaurant in Vancouver outside of the company?