YEW restaurant + bar is celebrating the Vancouver 2010 Olympic Winter Games with some fresh and fun new dishes and drinks. Last week I was an invited to YEW for an Olympic Samper Tasting and tasting I did, try some of these dishes as you cheer on the athletes. In addition to their ultra popular Olympic cocktails introduced last month, YEW restaurant + bar has created an entire calendar of food and beverage inspirations.  Every day during the Olympics YEW is featuring an edible Olympic-inspired feature. 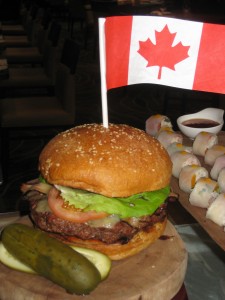 Bring your appetite, or four or five friends to help you dive into our one pound Olympic Burger, this one has to be seen to be believed.  Boasting a very generous serving of Kobe and Alberta Beef, Sautéed Chanterelle Mushrooms, Double Smoked Canadian Tyroler Bacon, Tomato Chili Jam and Agassiz Farmhouse Cheddar all nestled between the buttery Brioche bun.  A side of crunchy Yam fries completes the dish. 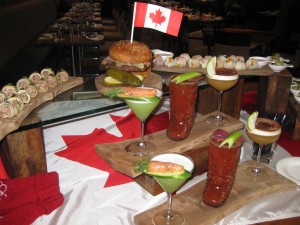 Inspired by the five famous interlocked rings the Olympic Salad has it all.  A healthy, energizing combination of veggies, protein, carbohydrates, color and crunch all tossed in a vitamin loaded dressing made with fresh orange juice, yuzu and ginger.  It’s a salad made up entirely of rings – Grilled Squid, Leek, Anelli Pasta, Radish, Green Onions Olives and Crispy Shallot Rings.

Their Maple Leaf Menu is a $45, three-course, prix-fixe menu featuring the best ingredients and flavours from Montreal, Calgary and Vancouver.  From Foie Gras Torchon, Braised Bison Cannelloni and Qualicum Bay Scallops to Duck Tourtiere, Crispy Skinned Salmon and Seared Ribeye Steak, mix and match your favourite flavours from across the nation and finish with a true Olympic Indulgence. To honour the world’s best hockey teams they have created a delicious Olympic dessert – a Dark Chocolate Coffee “Puck,” Muscavado Mirror “Ice” and Cracker Jack Ice Cream. 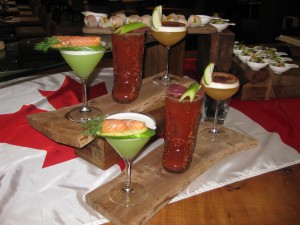 Joining the line up of Olympic inspired Canadian cocktails -the Bronze Montreal 1976, the Silver Calgary 1988 and the Gold Vancouver 2010 are four new drinks.  The Energy Boost Cocktail features the best local espresso from Vancouver’s 49th Parallel and Van Gogh Espresso Vodka to keep you cheering; the Apple Cider pairs Triple Jim’s Organic Apple Cider from the Okanagan Valley with a Jack Daniels kick to keep you warm; the 2014 Russian Breakfast Cocktail is exclusive to Saturday, February 27th and is a nod to the next hosts of the Olympic Winter Games.  Finally, the Olympic Torch Cocktail is sure to draw attention, prepared hot and poured over dry ice, this smoking-good cocktail is only available for purchase to guests whose home country has captured a gold medal that day – so bring your passport! 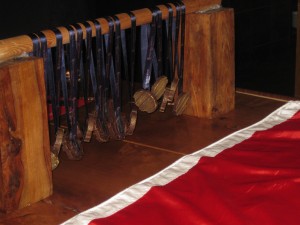 I loved the burger but it is a must that you share it with at least one or two of your friends!!

YEW Restaurant and Bar is located in the Four Seasons Hotel at 791 West Georgia Street.

Gastown: Eat and Drink during 2010 Olympics