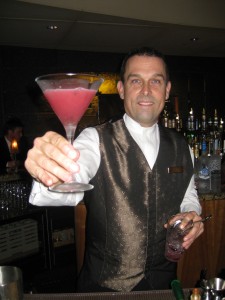 As the 2010 Olympic Games approach, a few Vancouver restaurants and bars are getting into the Games-time spirit with their own Olympic-related beverage promotions. Here are some of the players, I had a chance to meet Bartender, “Jetside Johnny” at the Jetside Bar located inside the Fairmont Vancouver Airport Hotel. Johhny has been with the hotel for the past 10 years and he has created these spectacular drinks to celebrate the upcoming Olympics. During the games athletes and their entourage will be enjoying these beverages as they travel thru the airport, you don’t have to be an athlete to join in the celebration. Take advantage of the days prior to the Olympics and go and visit these great bars around the city. Canada Line will take you close to each of these bars, leave your cars at home and enjoy the ride.

Fans looking for more of a buzz than a boost will stop by the Jetside Bar at the Fairmont Vancouver Airport for a blueberry pomegranate infused ‘Canada Line Cosmo,’ made in honour of the Canada Line Skytrain. 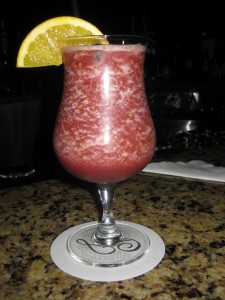 Long Track at the Jetside Bar

Guests, Olympians and fans looking for a healthy charge during the 2010 Olympic and Paralympics Winter Games can rush to the Fairmont Vancouver Airport’s signature restaurant, Globe @ YVR for gourmet to go energy boosters. Whether dashing to the Richmond Olympic Oval or crossing continents, those who want a quick stamina boost can grab the new “Long Track” energy drink smoothie. It provides a healthy jolt of Olympic proportions: an all-natural frozen blended fruit drink, infused with B6, B12, green tea, marionberry and locally sourced organic bee pollen. There are no additives, preservatives, dairy, gluten, or nuts.

Mixing it up in YEW bar, they have created three unique Olympic inspired cocktails designed to commemorate Canada’s Olympic presence. Each drink offers flavors unique to our Canadian culture.

BRONZE – Montreal 1976 is made with Canadian Rye infused with Quebec maple sugar and granny smith apple.

GOLD – Vancouver 2010 showcases one of B.C’s biggest exports. The cocktail is made with dill and cucumber infused Gin from Victoria’s new distillery and a candied smoke salmon garnish.

As the Olympic torch makes its way across Canada, the Granville Room shows its spirit with their Olympic-inspired cocktails, created by resident bar star Trevor Kallies. Available until the end of the Vancouver 2010 Olympic and Paralympic Winter Games, each cocktail is inspired by a great Canadian Olympic moment and showcases Canadian liquor and ingredients. Trevor created five cocktails in honour of the five Olympic rings, which sell for $9 each.