I had the great pleasure of being invited to lunch at Joe Fortes to dine and meet with Robert Koczuba (Winemaker at Torley) and ILona Kallay (Export Director at Torley) along with their importers to learn about their HUNGARIA Grande Cuvee Brut sparkling wine and Chapel Hill Pinot Grigio wine. Whitehall is the importer in Canada and represents Torley in all markets, the Hungaria Grande Cuvee Brut has been a shining star in British Columbia and is also a Silver Medal Winner and now has a general listing which means this wine is available in all BC liquor stores. The Chapel Hill Pinot Grigio wine which launched in BC in July’09 immediately sold out and a new shipment is on the way. 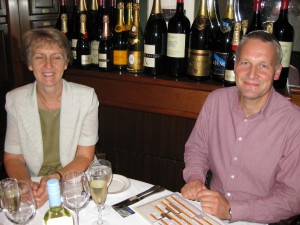 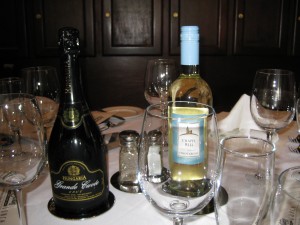 Torley exports 500,000 cases of their sparkling wine, of this 1/3 goes to Sweden which is their #1 market outside of Hungary, Estonia, Finland, UK and Vietnam are also large importers of their products.  Robert is responsible for the sparkling wines production and he has held this position since 2001. There are 3 methods that Torley uses to produce their wine. The Grand Cuvee uses the Transfer Method where the wine ferments for 3 months and then is aged for 15 months minimum, the grapes are harvested from their own vineyard in Etyek which is 35 km SW of Budapest in Hungary.

I asked Robert how many bottles of sparkling wine they currently produce and he said 1.5 million from the Transfer method, of that 500,000 bottles is Hungaria Grand Cuvee. I then asked ILona which sparkling wine has the highest market share and she said Canada. 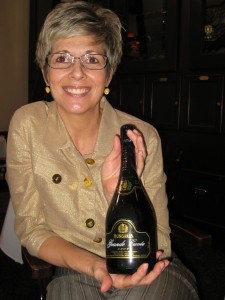 Chapel Hill Pinot Grigio wines entered the Canadian market in July ’09 these wines use different grapes for their Pinot Grigio from Lake Balaton a region that is also SW of Budapest. Robert told me that this wine has a tasting notes of fresh, fruity and crisp and a good balance between nose and taste.

When introducing a new wine to a market, both Robert and ILona indicated that deciding on Distribution is the most important, followed by Press Tasting and then Competitions and exposure on the Internet.

Sandra Hubner will be taking part in this years “Slurp & Swirl” event that will be held on November 10th at Joe Fortes Restaurant with their Hungaria Grand Cuvee Brut.

Feast of Fields at UBC Farm