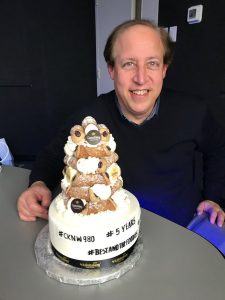 I celebrated 5 years as host of the Best and the Foodiest yesterday on CKNW 980 am radio with a special show where we talked about the food trends around the city over the past 5 years as well as what is hot and the latest crazes. We also enjoyed a delicious Cannoli Cake made by our friends at Italia Bakery/Cannoli King, it was a Chocolate cake covered in white fondant, topped with a cannoli tower of coffee and vanilla cannoli. You can listen to yesterday’s show here.

I became host of the inaugural Best and the Foodiest show on February 11, 2014 on The Shift with Host, Mike Eckford. The show set out to be all about food in and around the city, where I talked about everything from new restaurants, to chefs, food trends, tasting plates, desserts and so much more. As things changed and radio evolved, after Mike left CKNW I did my show with a multitude of hosts and sometimes on my own until Lynda Steele joined the station in August 2015, my segment then moved to her show and the Best and the Foodiest continued. The show evolved as Drex joined as her co-host and I then had more to chat about with both of them. Another change took place in 2018 after Drex moved on to a different show and it was back to Lynda and me talking food together once again.

You can listen to the past 5 years of shows here . If you have been a regular listener to the show we thank you, and if you haven’t we welcome you to listen each week on Tuesday’s around 2:45pm on CKNW 980 am for The Best and the Foodiest on The Lynda Steele Show.

Around the City in the Acura RDX 2019