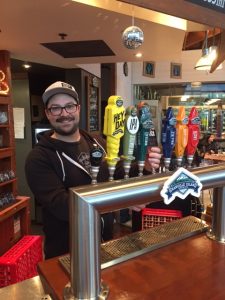 I had a chance to chat with Mike Sharpham who brings over half a decade of beverage experience to Granville Island Brewing. Working as a drinks expert at specialty retail stores for many years allowed Mike to collaborate with Canada’s most notable brewmasters and beer experts, transforming him into a master of beer, liquor and wine. He has worked in retail of whiskey and beer and has spent the last two years as Granville Island Brewing’s Beer Merchant, Mike brings a great energy and personalized flare to beer advocacy, educating everyone from beer beginners to beer lovers. Mike hosts monthly events at the GIB taproom, helping guests to explore the beer ingredients, food pairings, and magic behind GIB’s small batch brews. Mike is working towards his Cicerone Certification to further champion elevated service for beer consumers.

What is your philosophy on food and beer?

It’s awesome, it is about the three C’s which are cut, complement and contrast. With the right beverage you can make the “cut”.

What are some of your favourite foods/dishes in the winter?

What is your favourite dish or dishes that you like to eat with a beer?

What is your role as the Beer Merchant entail?

I do a random mix of stuff including, education and media relations, help with management of our small batch program and I get to talk about beer. 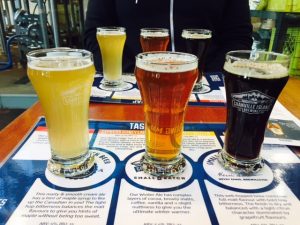 As I was learning about their Small Batch brews, I tasted from left to right, the Gose, Strange Brew and Mocha Porter.

What is the shelf life your for your beer unopened?

It is about 3 months.

What are the next beers about to be released?

Granville Island Brewing is taking part in our next Art, Eat & Sip event on January 25.

Winners of the Vancouver Foodster Challenges in 2016

Dine Out Vancouver 2017 Restaurants and Events