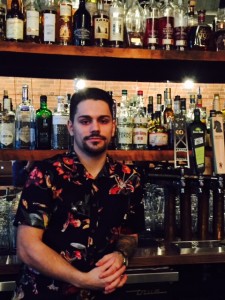 Micky’s bartending career began a few years ago when he worked as a server who then changed positions to be a Barback at the Yaletown Distillery in the summer of 2013. In September 2014 he became a bartender at The Diamond and then at Wildebeest where has been ever since. You can also find him behind the bar at Hello Goodbye Bar in Yaletown.

I was a server at The (Yaletown) Distillery when I opted to take some shifts behind the bar as a barback (I had previously been a barback at the Brewpub next door) – that lasted a whole three weeks before I was ushered to start bartending full time. This coming shortly after I was tossed into service behind the bar on an exceptionally busy night and somehow, came out unscathed.

Barate Kid is definitely the funnest and most thrilling competition out there. Not only is it fast-paced, sudden-death draws; but it captures the true skill of a bartender in scenarios we encounter everyday at work. You are judged on Speed, Quality, and Presence. Despite the intensity, I saw it as a friendly competition. I’ve found great success in using humor to remedy the stress of high-volume situations at the job itself, and I took the same approach to this competition. Competing all the way through to the grand finals was a hell of an experience!

What are your top 5 Bartending competitions you have placed in the top 3?

If memory serves, its just 3 right now, plus Barate Kid. CBPA Cup (86co), Jamesons Barrelmaster, and Bacardi Legacy (Regionals). All of them being great experiences. You can learn a lot from even just attending competitions let alone competing in one.

I had a guy ask me to make him something that tasted like peaty ice cream. That one was interesting. A lot of people will ask for drinks made at other bars as well, whether around town or around the country. It’s cool to see how well you can nail a drink in which you only know the ingredients, not the measurements.

It either comes from a spirit, an exotic ingredient, or unusual flavor pairings. Classic cocktails are great for tweaking around with as well. Sometimes it comes from a flavor standpoint, where you find flavors from a various degree of applications to mix together; sometimes it comes from mixing a certain type of spirit with a certain type of vermouth or liqueur. Most times I will work within the boundaries of products already on the market, but once in awhile I’ll get my hands on some form of fruit/produce that I don’t see used often and build an idea from there. The main inspiration is the trust you build between you and the people at your bar when you make them something they visibly enjoy drinking.

That they, in their finest form, can only amount to so much without a great atmosphere. To go out to eat and drink is more than to appease an appetite or quench a thirst – It’s to have a great experience out. You’ve got to do your food and drinks justice by providing your guests with a memorable experience. Nailing both of these is how you can really build a trust between your establishment and your guest, and it requires the cohesiveness of well functioning team. I personally, as a drink fixer, like to make sure that anyone who sits at my bar knows that there wasn’t a better bar stool they could have sat on anywhere else. To achieve that requires more than placing a delicious cocktail and/or a spectacular dish in front of them.

I’m easy. My taste for food is pretty Italian. Green salads, white pastas, red meat – thats what I grew up on. I typically enjoy Bison and Lamb dishes, and any kind of tartare. For pasta, gnocchi definitely takes the cake. That texture…

Where do you get your inspiration to create your cocktails at Wildebeest and the other bars you work at?

The room always inspires me, as well as the neighbourhood. When someone comes in, looks around, and asks me to make them anything – they likely want a drink that represents the bar they are sitting at. Out-of-towners especially, tend to want a drink that makes them feel like they are in Gastown. The Diamond really emphasized classically structured cocktails, so the simplicity of those types of drinks always inspired me to aim to create modern classics. You could say that the guest is an inspiration as well, as figuring out what they like is an art in itself.

As far as our menu at Wildebeest, lots of the inspiration comes not only from classic cocktails, but from the kitchen. They are always finding different ways of expressing meat and flavors in a contemporary fashion, while still being all about the cut. Our drink lists offers twists on classics with ingredients such as Horseradish and Campari Sorbet, which pay homage to the experimental nature of our amazing food program. The vibe at the beest is rustic, yet elegant, with a hint of cheekiness. You can say the same about our drinks.

When it comes to mixed drinks: Strong spirits, juicy, refreshing flavors. Penicillins, Margaritas, Daiquiris, etc. Those are the go-to. For spirit forward drinks, I like anything rich and viscious, like a good Red Hook. Before I eat, I tend to slam aperitifs like a madman. When it comes down to it though, I’m an absolute sucker for champagne and anything involving it.

Cigars (infusions), oxidized vermouth (which is made by neglecting refrigerating your bottle of dry vermouth for a few years until it turns into a delicious sherry.) I’ve used traditional mexican herbs such as oregano, and cilantro. I may have made a few bloody marys with avocado and jalapeno pepper as well. Turmeric is one of my favorite spices to use – although all of these ingredients that are common in cooking, are already starting to become common in bartending. I’d rather focus on always having a unique approach to mixing new cocktails because one day there won’t be a single ingredient left that somebody somewhere hasn’t already tried using.

This is never an easy question to answer, but I’ll have to go with a Margarita. Being one of the most (if not the most) consumed cocktail on the planet, it is also one of the hardest to nail correctly, if you ask me. But when it’s made well, it’s outstanding. There is such an abundance of great tequilas in Vancouver and everytime I get my hands on a new bottle I’ll stick it in a Margarita. The type of tequila you use can change the dynamic drastically yet still be as delicious as ever, which is what makes the Margarita such a versatile drink.

What is your favourite dish or dishes that you like to eat with a cocktail?

I typically like to drink cocktails without food – I’ll go for an aperitif or a beer if I’m having a dish. Some dishes however, such as our Venison (roasted cauliflower puree, grainy mustard spatzle), I’ll pair with a Vieux Carre. I’ll almost always rock a Penicillin with our Bison dish (smoked potato, parsnip puree). Cocktails are very useful for pairing with food, because you can directly match complimenting flavors. I would still rather be on the other side of the bar making them for you though. I don’t indulge too often in that kind of pairing myself.