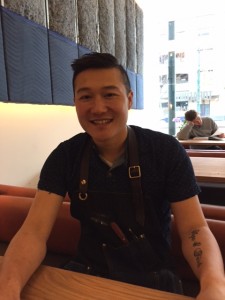 Clement studied at Vancouver Community College in the Culinary Arts Program graduating in 2001. He also received extensive training in the baking and pastry arts at the Dubrulle Culinary School (now the Arts Institute of Vancouver), graduating with a diploma in 2002. In 2003 he worked three jobs at the same time, Blue Water Café, Rain City Grill and Delilahs for one year. He then moved on to the Fairmont Vancouver Airport where he held the positions of Garde Manger to Saucier, he was there for three years and finished his apprenticeship there as well. In 2006, he worked as Chef de Partie at Chambar for 8 months. In 2007, he was the opening chef for Lucky Diner and later that year, he was the Sous Chef at the Kettle of Fish. In 2008, he started off as a Sous Chef at the Hyatt Regency where he was promoted to Chef de Cuisine and he worked there until 2010. They then sent him to Curacao to open three restaurants, Shor, Swim Pool and Bar Grill, and Medi Restaurant which are all properties of Hyatt Regency Curacao Golf Resort. He returned to Vancouver in 2011, working as a chef at Hapa Umi, then on to the Glowbal Grill and Sanafir in 2011-12. In 2012 he started him his own food truck with partner Steve Kuan, Le Tigre Truck. At the same time he worked at the Fairmont Pacific Rim Raw Bar as a sushi chef evenings, part time. In 2015 he became the Executive Chef/Co-owner of Torafuku. 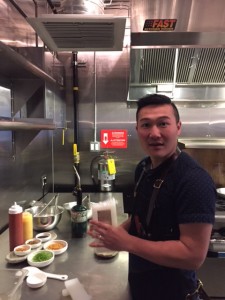 What got you into Competing?

When I was at the Fairmont Vancouver Airport they were participating in a lot of competitions. I watched my friend Chef Jason Harris and I got excited.

In 2011 –Chef of the Year by the Canadian Culinary Federation 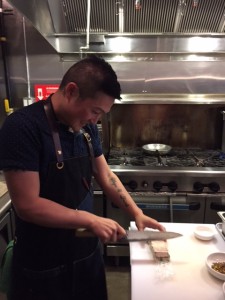 Being creative and trying to stay on top. You have to make mistakes to get better. 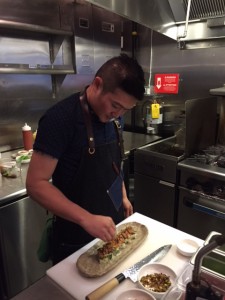 Things don’t just happen, you have to earn them, it’s all about team work.

You can always get better, there is always something to learn. 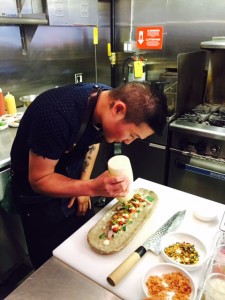 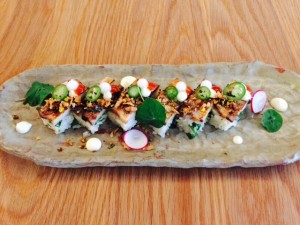 I wanted to do a version of our kickass rice on our food truck, making this in a restaurant environment and using my background as a sushi chef. 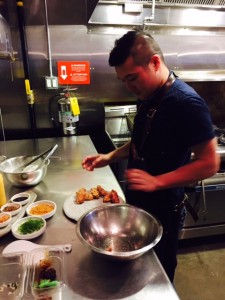 A good bowl of noodles 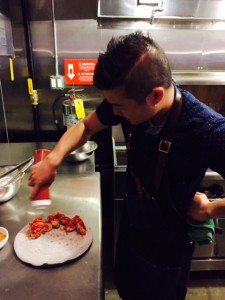 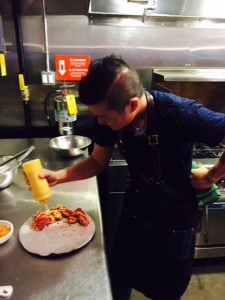 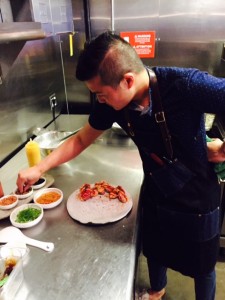 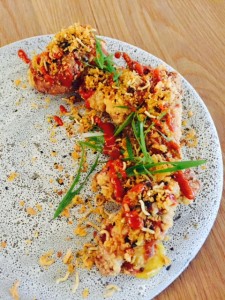 I wanted a good chicken wings dish with an Asian influence and to make it modern.

A type of Japanese crumble made of dehydrated eggs, seaweed, bonito and sesame. 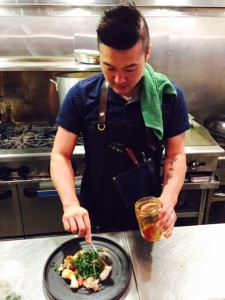 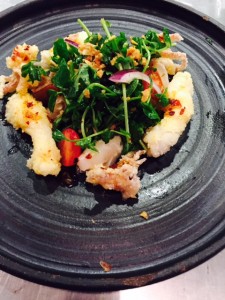 I really enjoyed growing up eating the Chinese version of it (deep fried squid). I modernized it where locals would appreciate it with texture and some heat.

What is your Apron of choice?

Custom made by Search and Rescue Denim

Are you still Competing?

Yes and no, I just trained Sandy Chen, she was at the Apprentice level, however she won 1st place in the Professional level for BC recently as the 2015 Top Iron Chef.

What is the Challenge operating a restaurant and a Food truck at the same time?

There is never enough time, different menus. Some things to do in a restaurant I can’t do on the truck.

What is a bad day for you?

Working with so many different chefs, you can’t let things frustrate you, there are always ways to fix something and to make it better (I take all my stress to the gym).

The Boathouse LobsterFest Menu for Fall