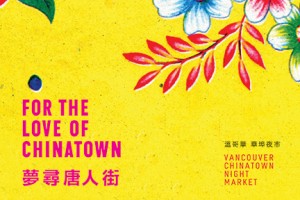 The much-anticipated, revamped Vancouver Chinatown Night Market is ready to launch its 2013 season officially on June 1st.  You will find some of the best outdoor entertainment and shopping in the city as well as a weekly on-site food truck gathering organized by the Vancouver Street Food Society and will include favourites like Vij’s Railway, Roaming Dragon, Le Tigre, Tacofino, and Mogu.

For the love of Chinatown, come to the Night Market!